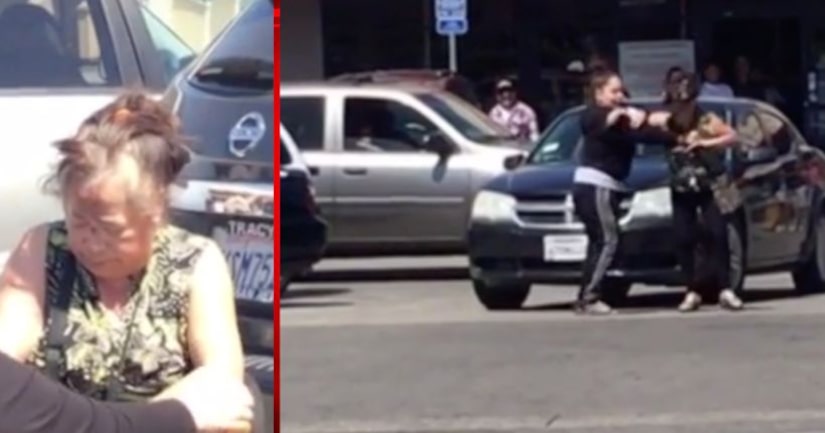 STOCKTON, Calif. -- (KTXL) -- A fender bender in a thrift store parking lot led to a violent brawl between two women in Stockton, and videos of the fight are going viral for all the wrong reasons.

In the video a woman in a black sweatshirt swing at another woman in a green top. Then, it appears that she grabs her by the ponytail and yanks her to the ground. The woman in green is then seen on the ground with her arm bent in the wrong direction.

"I pushed her. And it was an accident," the younger woman in the video, Vanessa Ortiz, told FOX40 from behind bars. "And my apologies to her and her family, whatever."

Ortiz, 25, is now in the San Joaquin County Jail for felony battery. Police are not identifying the other woman in the video, but say she is 67 years old.

"She's not your average old lady, she's like a spicy old lady. As you can see I have scratches on my face, she snatched my glasses off," Ortiz said.

Some witnesses say the four-decade age difference between these two women doesn't paint the full picture.

Gonzalez says the older woman was the aggressor.

"The old lady was instigating cause the lady was like, 'I already exchanged info with you, what more do you want?' and the old lady started getting all in her face and got aggressive with her," Gonzalez told FOX40.

Bernardo says the beginning of his video shows the older woman putting her hands up first.

Ortiz told FOX40 she wondered how she was supposed to walk away from a woman who slapped her hand and scratched her face.