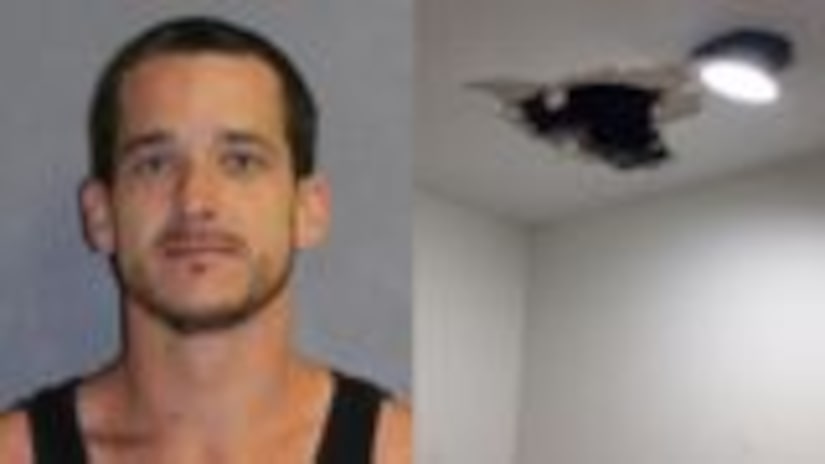 Suspect says he didn't want to go back to prison

ORANGE CITY, Fla. -- (WKMG) -- A man who was arrested on multiple charges said he escaped custody by crawling through a hole he made in the Orange City Police Department bathroom ceiling because he was high and didn't want to go back to prison, according to an incident report.

Michael Caruso, 31, was arrested Sunday afternoon at a Kohl's store in Volusia County after he tried to leave the store without paying for a Shark vacuum and a Marley speaker, valued together at $529, police said.

Caruso ran when an Orange City police officer arrived to take him into custody, according to the incident report. The officer chased Caruso in his vehicle then got out to arrest him, but because he forgot to put his car in park, the vehicle rolled toward them as the officer was trying to make the arrest.

The suspect moved out of the way to avoid being hit as the officer tried to stop the car, which rolled over a curb. Caruso continued to resist arrest and pretended that his leg had been run over by the rolling vehicle even though it hadn't, police said.

The officer chased Caruso once again, and after another struggle, he was taken into custody, authorities said.

Caruso was arrested on charges related to that incident and on an open warrant and was taken to the Orange City Police Department for processing.

He told police several times that he needed to defecate so an officer took him from a secure holding cell to a single-stall restroom and waited outside the door while Caruso used the bathroom, police said.

After a few minutes, Caruso said he was almost done and needed just a few more minutes. Officers started to pound on the door and demand that he open it.

When there was no reply, officers opened the door to find Caruso had destroyed the sheetrock to create a hole in the bathroom ceiling and then climbed into the attic, the report said. He removed the attic ceiling fan and escaped the building through that hole, police said.

A call came in to 911 as police were trying to find that Caruso from a man who said the suspect was at his home asking for a ride because he had just escaped custody and police were looking for him, according to authorities.

Police said Caruso ran away from the residence when the homeowner held him at gunpoint.

A second call came in from another homeowner who said Caruso tried to push his way into the Springbank Avenue residence. The homeowner was able to fight off Caruso and lock the door.

A K-9 found Caruso on Crittenden Avenue, police said. The dog bit the suspect and police were able to take him into custody.

Caruso told authorities that he tried to escape because he "does stupid things" when he is high on drugs and because he didn't want to go back to prison.

Caruso is charged with six counts of grand theft, five counts of burglary, resisting an officer and escape. He's being held without bond in the Volusia County Jail.