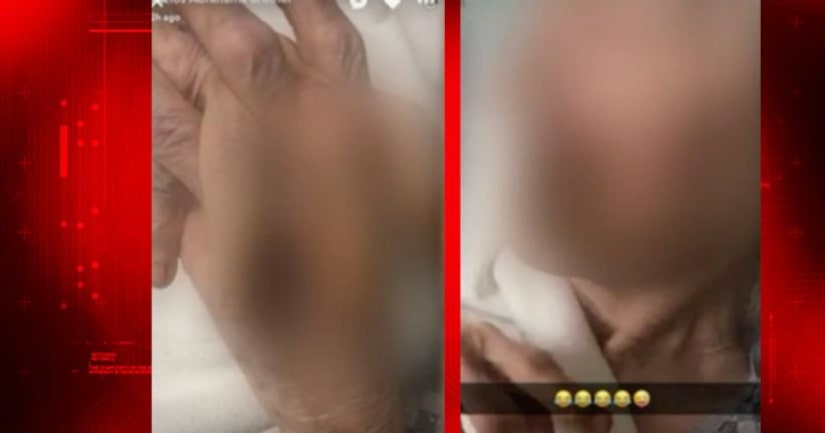 AUSTIN -- (KXAN) -- Photos posted to social media showing a sleeping elderly woman, her right hand covered in what appears to be dried feces, were posted by a north Austin nursing home employee.

A second photo shows someone tickling the sleeping woman's nose with a tissue or feather apparently prompting her to reach up and touch her own face with her dirty hand, which a third photo also shows.

“This nursing facility has reported the incident to DADS [the Texas Department of Aging and Disability Services] so we can investigate,” wrote agency spokesperson Kelli Weldon in an email.

“The facility tells DADS it has also reported the incident to police and has suspended the certified nurse aide pending an investigation. We are following up with the facility to make sure it takes all appropriate actions.”

In a Snapchat capture sent to KXAN from a tipster, the poster indicates he works at the Windsor Nursing and Rehabilitation Center of Duval, located at 5301 W. Duval Rd., as a certified nursing assistant.

A fiery online exchange shows someone offended by the pictures writing: “Imagine if that was your parents…”

The employee responded: “Who gone make me loose [sic] my job surely not you!” When KXAN went to the man's home, his family said they had no comment.

Then a young man came back outside, responding to KXAN's questions about the man's whereabouts and if he would answer why the photos were posted.

“He's sleeping. We don't have time for that,” the man said.

“I apologize. I had nothing to do with it. I know his actions [were] wrong,” the young man continued after KXAN asked what he would say to the family of the elderly woman. The facility's administrator, TJ Helmcamp, would not confirm the allegations citing employee privacy rights.

Helmcamp says in general he would treat an incident like this as borderline exploitation of a resident, and he would take immediate action.