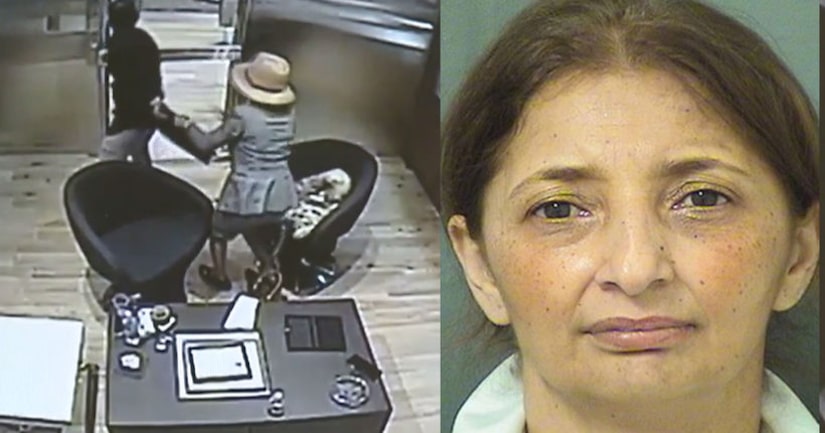 BOCA RATON, Fla. -- (WKMG) -- A 46-year-old woman who tried to trick a Boca Raton jewelry store owner so she could walk away with more than $6 million in jewels was arrested after the owner locked her inside the store's vault room, police said.

Fatima Milanovic was arrested March 18 on charges of organized scheme to defraud and grand theft.

Boca Raton police said Milanovic tried to dupe ECJ Luxe Collection store owner Vladislav "Bobby" Yampolsky into taking a replica package with fake stones in it so that she could walk away with 11 jewels worth $6.77 million and change.

According to a Boca Raton police report, Milanovic went to the Mizner Park store on behalf of a third-party business associate who had spent the past two months negotiating a purchase with Yampolsky via email.

"Bobby stated that from the time Fatima had arrived, her behavior was very suspicious," the police report said. "She had attempted to distract him on several occasion(s) while the jewelry was on the table."

Yampolsky said she was nervous and shaky.

"She told us she was very sick," he told News 6 partner WPLG-TV.

After she was shown all the stones, Milanovic asked to put them in a box that she brought and sealed it with industrial tape, the report said.

Yampolsky reluctantly agreed and told her that he would keep the package in the vault until he received the wire transfer, but Milanovic insisted on holding it and put it in her purse, the report said.

After arguing back and forth about who should hold the pricey package, Milanovic pulled a package out of her purse and gave it to Yampolsky, who knew right away that it was a replica, the report said.

Yampolsky locked Milanovic in the vault room while he called the police. The arresting officer wrote in the report that surveillance video from the vault showed Milanovic rip up the pre-made package that was already in her purse while she was locked inside.

"This one takes the cake," Yampolsky said. "I'm just glad no one got hurt, and I'm glad we got a thief off the streets."

Milanovic, who doesn't speak any English, was released on bond.

Yampoksky said the woman is a French national who might be involved in an international crime ring that targets high-end jewelry stores.