A Texas-sized mystery an hour south of Dallas: A loving father leaves work, runs a few errands, then disappears. Crime Watch Daily joins the hunt to find him.

John Terry is a devoted father to his two young boys; he's a highly valued employee without an enemy in the world. He worked hard to support his sons. So when he went missing, family immediately knew something was wrong.

Today he's a man at the center of a baffling mystery.

April Stoll is the intrepid investigator from the Hill County Sheriff's Office who spends every day sifting through the evidence to find just who, or what, is behind his disappearance.

And she has her work cut out for her.

Is it murder? Or could it be that John Terry made himself disappear?

It starts as a typical beginning of the weekend for John Terry in Hillsboro, Texas.

John Terry left work on Friday, Oct. 17, 2014 and did some routine shopping. He's seen on store surveillance at Walmart during what may be his last hours on Earth.

"We see him pull into Walmart, he goes in, he buys a gab of dog food, a bag of cat food," said April Stoll. "This is the last time he is seen out in public by anyone. The last captured footage of him, documented report of him alive."

The next day his abandoned Jeep is reported to police by a road crew working a pipeline on a remote dirt road about 20 miles from his home.

For investigator Stoll, the vehicle is a hotbed of unanswered riddles.

"There was loose paperwork in the cup-holder area, just the way that it was positioned it looked like it had be shuffled around almost intentionally," said Stoll.

And that's not all cops are thinking. Stoll tells Crime Watch Daily she does not think John Terry drove his Jeep to that location.

Police say you have to go back to the remote cabin where John was living. They believe that's where he went after leaving Walmart.

What they don't know is if he ever made it past his own front door.

"The exterior of the door, they did locate some small areas of blood splatter, and those were collected," said Stoll. "Other than that there was nothing out of the ordinary."

A search of the area yields no body. Investigators begin retracing John Terry's last few days. They learn that his two young children are with their mother, John's ex-wife Rachel, for the weekend. Police say Rachel and her live in significant other Steven Oberle last saw John earlier on the same day he disappeared. They stopped by his job to pick up overnight bags for the kids.

Rachel was interviewed by police shortly after John Terry went missing. But investigator Stoll says she has a few more questions. In fact there's a long list of people investigators would like to question. One of them is the person John reportedly had an appointment with to buy a new bed.

"Where John lived he was sleeping on a fold-out sofa bed, but nobody could tell us where he was getting the bed from," said Stoll.

For a guy who didn't seem to have any enemies, there are certainly a lot of different theories about who wanted him to disappear. Friends and family say John Terry had recently ended a relationship with a girlfriend.

"One girl that he had went to school with, that he had known for a better portion of his life. I don't know if you'd call her bat crazy or not but I believe they just tried to mingle and it didn't work, so they split ways," said Cody Terry, John's brother.

Now for the first time since the day John Terry disappeared, his ex-wife opens up to Crime Watch Daily about how hard the investigation has been on her. Terry's ex-wife has taken some heat in Hillsboro because she has not joined any of the searches for John. We had a chance to get her side of the story.

Rachel agreed to talk to Crime Watch Daily in a first-time exclusive interview for television. Rachel hopes this interview will help solve the mystery surrounding her missing ex, the father of her two young sons.

"My gut tells me it's going to be a homicide case," said Hillsboro County Sheriff Rodney Watson. "I really believe that things don't just add up for him just to fall off the face of the Earth."

At the time of his disappearance, John Terry was 30 years old and had a full beard. He stands 5 feet 9 inches tall and weighs approximately 180 lbs.

He has a tribal dragon tattoo that runs from the back of neck to his left arm, and the numbers "1984" tattooed across the top of the chest.

If you know anything about John Terry's disappearance, or if you saw him the night he vanished, contact the Hill County Sheriff's Office (254) 582-5313. 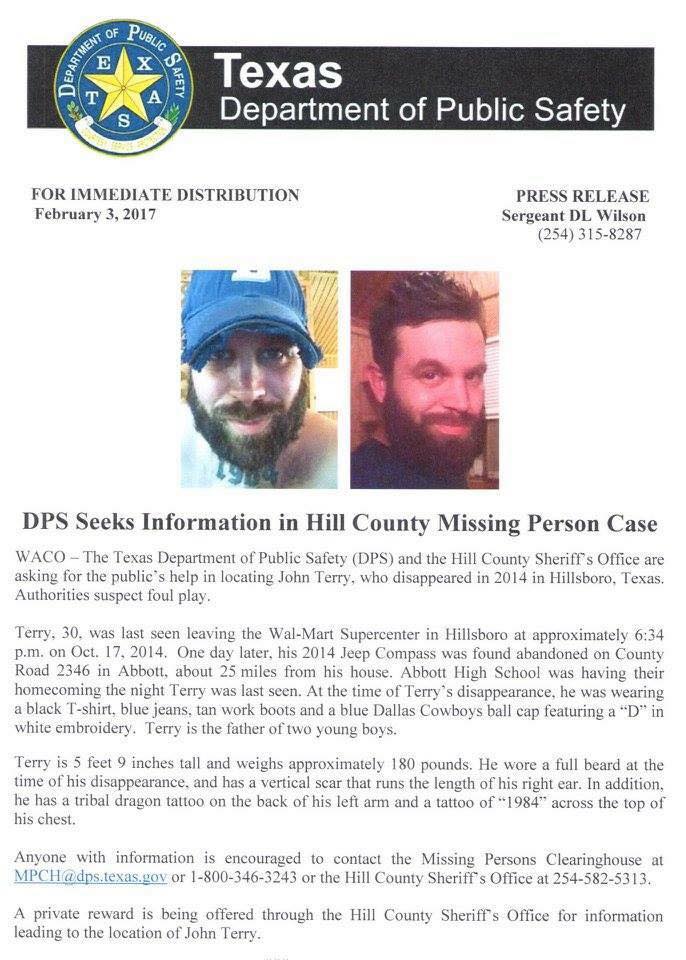