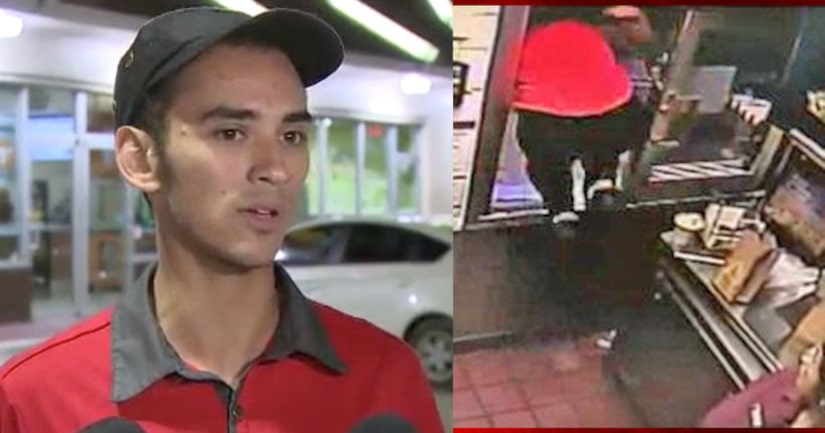 DORAL, Fla. -- (WPTV) -- A South Florida McDonald's employee is being hailed as a hero for helping an off-duty police officer in medical distress.

The incident was caught on surveillance video.

Pedro Viloria, 22, was working the drive-thru when an off-duty Miami-Dade officer pulled up with her kids Tuesday morning at a McDonald's in Doral.

"I never panicked. I never panicked at all. My brain was on hero mode. Totally," said Viloria. "I thought immediately something's going wrong with that woman now, and I got to do something to help her."

She was having a medical emergency, and the young man didn't hesitate to help, hopping right out of the window and running to her car.

"Her kids were screaming, like, 'Mother, mother! Stop it! Mother, what are you doing?'" said Viloria.

Another camera shows what appears to be the officer's car rolling forward.

Inside the restaurant at the same time there was an off-duty Miami-Dade Fire Rescue officer. He ran outside to help the police officer.

But it was Viloria's quick thinking that alerted everyone that there was person in need.

"I thought if these kids lose their mother today, that's going to be tragic," said Viloria.

Thanks to his help, it didn't happen.

"It is what a hero does. If I needed to die to save that woman, I would have done it," said Viloria.

The officer was taken to an area hospital, where she is listed in critical condition. It is unclear what type of medical emergency occurred.

Courtesy of WSVN via CNN Newsource