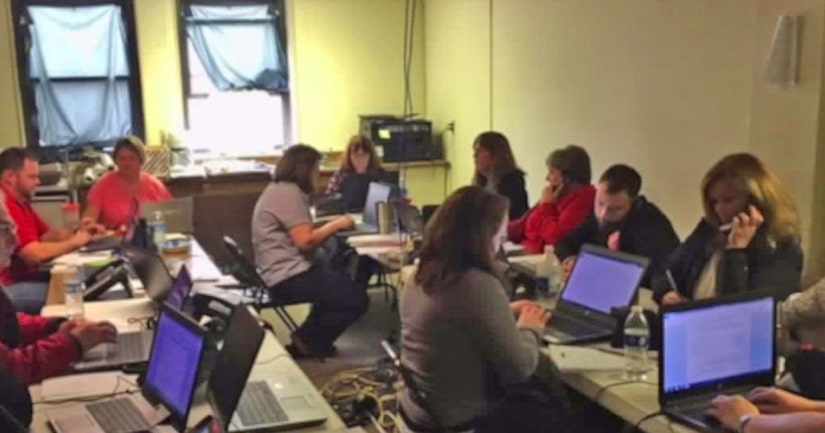 DELPHI, Ind. -- (WXIN) -- Carroll County Prosecutor Robert Ives told FOX59 the law of averages favors that of the thousands of tips that have poured in and the hundreds of doors police and FBI agents have knocked on in connection with the murders of Abby Williams and Libby German.

Investigators say they've possibly met the killer or killers, or may have the clue that will wrap up the case. They just don't know it yet.

“I think there's an excellent chance that in these tips, somebody has named the right person,” said Ives of the more than 13,000 submissions that have come in to investigators. “When you ask me, 'Is it possible some police officer has talked to him?' I think it's extremely likely that's happened.

From a command center on the town square in Delphi, authorities have served approximately 70 subpoenas and a couple search warrants approved by Ives in pursuit of the man who abducted and murdered the girls near the Monon High Bridge Trail east of town on February 13.

"If we're looking for third party data, if we're looking for information from a company, or a business, that the business acquires in the course of its business, that might relate to an investigation, we send a subpoena,” said Ives. “If you're looking for evidence that relates directly to proof of a crime and it's in a realm of privacy, in a person's home, in a person's phone, in a person's computer, on their person, some other situations, then you have to get a search warrant for that type of information, and we've gotten some search warrants but often those search warrants didn't directly relate to the investigation of the killing of the two girls. They're related to other matters in the course of this investigation. When so many people are being checked on, other things get found.”

That was true in the arrest of a local man known to investigators last weekend who is being held without bond on a probation violation for an alcohol-related offense.

Sheriffs and state probation officers have questioned registered sex offenders in several north central Indiana counties to determine their whereabouts on the day the girls were murdered and then confirmed those accounts with other interviews or polygraph examinations.

“This is really an unprecedented thing for Carroll County,” said Ives. “There have been or there will be charges relating to things that have been uncovered.”

Each day, the small town of almost 3,000 people is flooded with police officers from across Indiana and federal agents from across the country, all searching for the clue that will lead to the girls' killer.

“With the data base that they have that was provided by the FBI, if a person has been checked on before, it's easy to tell they've been checked on before,” said the prosecutor. “The crime is so serious that you're following leads you might not otherwise follow before. There's no obvious suspect as there often is.

“They go out and check on things, they report back, sometimes people are called in for statements, sometimes other avenues of investigation are taken up with regard to particular people.

“On any particular day there are twenty FBI agents and 25 or 30 officers,” observed Ives. “On some days it's probably as many as 200 people working.

“That goes on not only here, that happens at Quantico, too,” he said. “The FBI is working on this in Virginia as well as working on it here.”

“Those citizens who are in Carroll County and in the Delphi area should be extremely proud of the law enforcement, the local enforcement, that is there and leading this investigation,” said FBI Special Agent Jay Abbott. “The FBI is extremely proud to be standing shoulder-to-shoulder with them in support of their leadership in this case.”

“No arrest is imminent,” he said. “No case is close to being developed.”

That extraordinary evidence came from Libby's cellphone as the young girl's device yielded at least two images of a man dressed in blue clothes walking along the bridge and captured his voice as he ordered the children, “Down the hill,” to their deaths.

“If you see that picture and you hear that voice, and you're going to call in a tip, explain why,” urged Ives. “'I've seen him wear those clothes, I know the way he walks, I know that combination of clothing, I know that voice, I know something about him.'

“'Not only do I know that person, but he said something to me, I saw something about him.'”

The reward for information leading the killer or killers of the best friends and youth softball players is more than $200,000.

“Look at that picture,” said Ives, “listen to that voice and don't assume someone else has made a call.”