A story that should serve as a warning to anyone using the computer for dating all starts with an Arizona man and a Facebook friend request.

An officer and a gentleman, caught between two women, a secret life, a clandestine meeting, and a mystery that ends in murder.

Cody Virgin, 25, and his girlfriend Nataly worked together as correctional officers at the La Palma Correctional Facility in Eloy, Arizona.

When Cody was only 9 years old, he had to grow up fast when his mother passed away.

"Once we lost our mom, he stepped up as soon as he turned 18, he started his goals and ambitions and he was hitting them every week," said Cody's brother Tony.

That meant going to school during the day and working a full-time job on the overnight shift at the local prison.

Then in September, Cody got a friend request from a woman named "Paige Woods." They have mutual friends, so Cody accepts the request. And soon the friendship turns into a flirtation. Paige is hard to resist. After four months of chatting with Paige online, she makes a proposal: Why don't they meet in person?

Even though he's in a committed relationship with Nataly, Cody agrees.

"It's just in the middle of nowhere," said Tony. "It's just mountains and just desert for miles, you can't hear nothing out there, it's pitch-black, there's no phone service. It's scary at night."

And you never know who you'll run into in the dark, desolate desert.

"Area is known for drug trafficking from Mexico," said Tony.

"If anybody does go out there they warn you to be armed because a lot of stuff happens out there," said Cody's cousin Cissy Torres.

But Cody is a correctional officer with training to handle himself in dangerous situations, so the curious young man heads out to meet his mystery girl.

"I last spoke to him 9 that night and he was on his way out to Arizona City to meet this girl, and that's the last time I ever heard from him," said Cody's cousin Conner Day.

The next morning, Conner is expecting a call from Cody to hear about his night. But when she still hadn't heard from him by late afternoon, she contacts the Pinal County Sheriff's Office. And since Cody is a correctional officer, law enforcement is especially eager to help one of their own.

"I ended up reaching out to a detective. I went to his office in Arizona City and I spoke with him," said Conner. She tells him everything she knows. "This girl Paige Woods sent him a Google Map to meet him out in the desert."

The Pinal County Sheriff's detective alerts the Border Patrol in the area. The search is on for Cody. And just who was this woman he was supposed to meet?

Arizona correctional officer Cody Virgin has been missing for 24 hours, vanished after what was to be a secret rendezvous in the desert.

Cody met the mystery girl Paige Woods through Facebook, so his family decides to reach out to her online. But when they go to her Facebook page, all the pictures and friends were deleted and the name had been changed to "Britney James," according to Conner. Then the profile was completely deleted.

Then Pinal County Sheriff Mark Lamb calls an urgent press conference and announces Border Patrol agents have found what appears to be an abandoned vehicle in an area known as Tater Hills.

"We sent the Casa Grande Police Department to make contact with the registered owner, family members of a Cody Virgin," Lamb said.

"Border Patrol agents were patrolling the area in the desert when they found Cody's car abandoned with the door wide open and no one around," said Tony.

And just outside Cody's car:

"Near the vehicle were some rack and shovel marks where it appeared somebody may have been attempting to hide shoe impressions or other physical evidence," said Sheriff Lamb. "There was blood located on the initial scene."

Cody's family is in disbelief. Cody's car and other evidence is taken in for processing while the search for the missing correctional officer continues.

"William created a fake Facebook profile as a female and had been talking to Cody," said Tony.

"Paige Woods" never existed. "She" is a he, and he is 26-year-old William Randolph.

It's a practice known in cyber circles as "catfishing" -- simply put, when someone pretends to be someone else online.

But why in the world is this William Randolph guy catfishing Cody?

"William knew my brother through Nataly, his ex-wife, which is Cody's girlfriend," said Tony. The same Nataly who is currently dating Cody.

"Cody had no idea that William was behind the fake Facebook," said Tony.

But catfishing is a far cry from murder, if that's indeed what happened. So investigators arrest Randolph for hindering an investigation and continue to look for more evidence. They begin with Randolph's truck.

"He has said that his truck had broken down and was unable to tell the detectives where the location of his truck was," said Sheriff Lamb.

Pictures of Randolph's black 2001 Dodge Ram pickup truck are released to the public and, almost immediately someone calls in with a tip.

After processing the vehicle, the Pinal County Sheriff's Office announces:

"At this time we are treating this as a homicide and we are continuing to look for Mr. Cody Virgin," said Lamb.

Authorities say William Randolph's truck was "used during the commission of a homicide in the Arizona City area." But there's still no sign of the missing correctional officer.

Then just four days after Cody disappeared, the sheriff's helicopter spots a fresh-looking bonfire from the air.

"Sadly, the body was charred and we were unable to immediately identify that as the remains of Cody Virgin," said Lamb.

While investigators wait on a positive identification on the body, they question Cody's girlfriend, Nataly.

"Police, they're saying she's not involved at all," said Tony, Cody's brother.

It's confirmed that Nataly was at work on the night Cody went missing.

"Cody's girlfriend Nataly is not directly involved, but she was definitely communicating with William behind Cody's back and gave him some type of false hope that if maybe he got rid of Cody that he would be able to be back with her again, and so that drove William to do things that are just unimaginable to Cody," said Tony. "He didn't deserve this, it's just not fair."

The body found in the desert on Feb. 4, 2017 is soon identified as Cody Virgin. Autopsy reports allegedly reveal Cody was shot in the head.

In addition to hindering an investigation, William Randolph is charged with first-degree murder and aggravated harassment.

Nataly has not been charged with any wrongdoing and denies any involvement in Cody's death. Cody's family members still suspect Nataly knew what was going to happen to Cody that fateful night. They claim since the couple lived together, Nataly had access to Cody's Facebook.

William Randolph is currently behind bars at the Pinal County Adult Detention Center. His next court date is March 24. Randolph maintains he created the fake Facebook account, but that he did not murder Cody Virgin.

Cody's family doesn't believe him and plans to push for the harshest sentence.

But no matter the outcome of the case, Cody's family knows they can never replace what's been lost.

"He was a real genuine guy," said Cody's cousin Cissy Torres. "I'm going to miss his smile. He didn't deserve it. He was just a young man starting out."

Crime Watch Daily reached out to Cody's girlfriend at the time, Nataly Felix, and she declined an interview.

Prosecutors asked the court to double the $500,000 bail to $1 million for William Randolph, saying the original bail was determined before the body was found.

Since prosecutors call the crime "heinous, cruel, cold and calculated," they have decided they will the death penalty in Randolph's case. His trial set to begin some time next year. 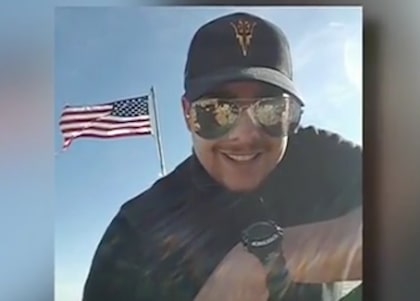 How to Avoid Becoming a Victim of a 'Catfish'