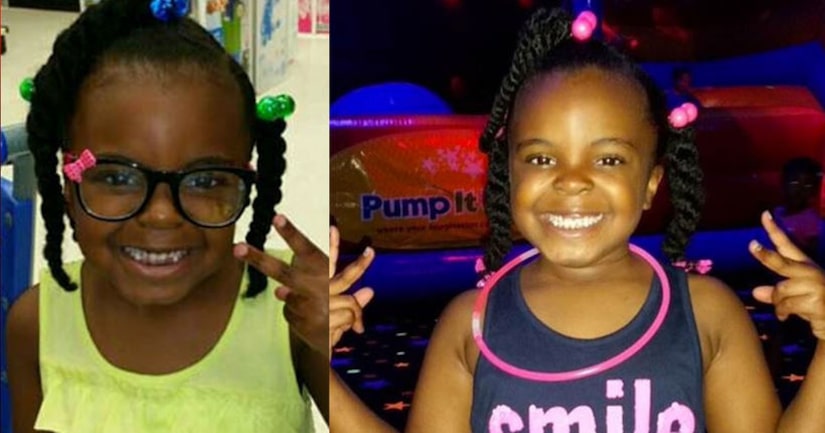 HOUSTON -- (KTLA) -- Houston police are looking for a female who shot and killed an 8-year-old girl a short time after the child's mother was involved in a car crash early Saturday.

The incident, which occurred around 2 a.m. at the Sam Houston Parkway feeder and Fuqua Street intersection, began when a white Pontiac Grand Prix ran a red light, according to television station KPRC in Houston.

After the driver of the white car ran the light, a black Honda Accord driven by 8-year-old De'Maree Atkins' mother slammed into the side of the Pontiac, police said.

"The light was green, and as soon as I got to the light it turned yellow – I couldn't stop," Latoyia Thomas, the child's mother, told KPRC-TV.

She said that another car, a dark-colored sedan, pulled up and the driver of the Pontiac jumped in.

The sedan pulled up next to their car, a woman rolled down one of the windows, and, for unknown reasons, fired at least five shots into the Accord, Thomas said.

"I saw the girl let the window down and point the gun out the window, and she just started shooting," she told KPRC.

It's unclear whether the alleged shooter was the driver of the white Pontiac or not, the Associated Press reported.

De'Maree, who was sitting in the back seat, was hit by the gunfire and taken to Memorial Hermann Hospital where she later died.

"She was a good girl, honor roll student, full of life. They took my baby away from me, why?" Thomas said of her daughter, who was in the third grade. "She didn't deserve this. She didn't. She was only 8."

The drivers of the white car and the other vehicle fled the scene, and police are still searching for both.

"Whoever you are, lady, justice will be served. They will get you," Thomas said.

Anyone with information about the case is urged to contact the Houston Police Department Homicide Division at (713) 308-3600 or Crime Stoppers at (713) 222-TIPS. A Crime Stoppers reward of up to $5,000 is available to anyone who provides information leading to the arrest and charges against the suspect or suspects.