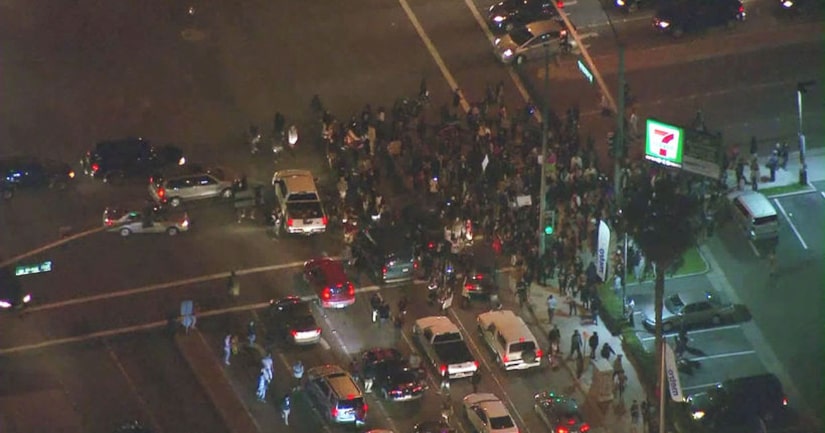 ANAHEIM, Calif. -- (KTLA) -- A total of 24 people were arrested after hundreds gathered in Anaheim Wednesday night to protest a caught-on-video incident in which an off-duty LAPD officer fired a weapon during a struggle with a 13-year-old boy.

All were arrested on suspicion of misdemeanor offenses, including failure to disperse, resisting arrest and battery on a peace officer, according to Wyatt.

About 300 demonstrators took part in the protest, which began in the Anaheim neighborhood where the confrontation took place before moving to major streets in the area, the Los Angeles Times reported.

The group was calling for charges to be filed against the officer, who has been placed on administrative leave, according to the Los Angeles Police Department.

Protesters chanted, “Hands up, don't shoot," and “Whose streets? Our streets,” as they marched through the area, at one point, blocking multiple lanes of traffic on Euclid, according to the Times.

There were several reports of windows being smashed at residences and on cars in the neighborhood, Wyatt said.

The protests stemmed from a confrontation between the off-duty officer and a group of teenagers outside his home, which was captured on a cellphone video that subsequently spread online through social media.

That incident happened Tuesday afternoon and was apparently spurred by "ongoing issues with juveniles walking across the officer's property," according to an Anaheim police statement.

The 13-year-old told KTLA it began when the officer yelled at one girl.

"I said, 'Hey, that's not how you treat a lady,'" the boy said Wednesday, standing outside the Theo Lacy detention facility in Orange Wednesday with his mother. "And then he came at me. ... He hit me. I ran to the street to run away from him, and he got me. He tried to trip me and then he kicked me in my testicles."

In video footage, an adult wearing sunglasses and a teenager shout and scuffle as a crowd of youths gather around to watch.