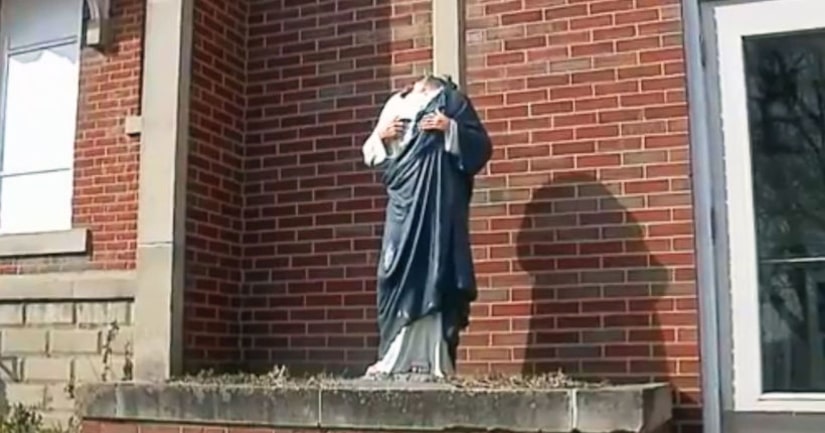 INDIANAPOLIS, Ind. -- (WXIN) -- For the second time in two weeks, members of a church on the south side of Indianapolis have found their Jesus statue vandalized, giving it the appearance of being beheaded.

“It makes me sad that somebody would do something like that,” said Pastor Brad Flaskamp. “I was hoping it was just a random act to destroy it in the first place.”

That's what the pastor and other members of Cottage Avenue Pentecostal Fellowship thought two weeks ago, the first time somebody broke the head off their concrete Jesus statue. The 5-year-old statue stands next to the front door of the church, which has stood in the 800 block of Cottage Avenue for roughly 100 years.

Two weeks ago, whoever caused the damage left the head sitting next to the statue. Church members were finally able to reattach the head on Saturday. But Sunday morning, it was broken off again. And whoever did it took the head with them.

“I can tell you that I don't think it's kids,” said Pastor Flaskamp. “It would have to be a kid that can wield a sledge hammer.”

Flaskamp and other church members don't know quite what to make of the recurring damage. There's no way to tell if it's the work of somebody seeking a thrill, or somebody trying to send the church a message, or something else.

“I kind of think it's someone new in the neighborhood that's got some really deep problems,” said the church's secretary, Sue Myers.

Despite the disturbing nature of the vandalism, Pastor Flaskamp was able to joke about it Monday.

“Someone needs Jesus, that's for sure,” he said. “And not just his head, that's the truth.”

Indianapolis Metropolitan Police have had an open investigation since the first time the statue was beheaded. But the nature of the crime means detectives will likely need somebody in the neighborhood to come forward with information.

“It is a difficult case to investigate,” said Sgt. Kendale Adams. “However, our detectives are very good about trying to connect the dots and get information from those in the community.”

There was hope that the crime may have been caught on a surveillance camera mounted on a nearby home, pointed in the church's direction. But the owner of the property says the new camera system was not yet running when the statue vandalism took place. The same homeowner said he was finishing the security installation Monday, and it would be running from now on.

As the investigation continues, church members say they just want the head returned. Pastor Flaskamp says if the suspect brings the head back and confesses to the crime, the pastor won't even call police on the person.