Jean Janvier was arraigned on two counts of first-degree murder on June 30. Janvier has pleaded not guilty.

UPDATE June 13, 2017: Jean Weevens Janvier, on the U.S. Marshals' 15 Most Wanted list for a double homicide committed in 2011 in Dorchester, Mass., was captured on Saturday, June 3, in Haiti and has been brought back to the U.S. to face charges, according to the Marshals Service.

After a thorough investigation by the U.S. Diplomatic Security Service, Janvier was apprehended in Santo, Haiti. The Haitian National Police located Janvier at his mother's house in Santo. Authorities confirmed his identity through fingerprints. Haitian National Police held Janvier in custody pending his removal from Haiti by U.S. Marshals, the Marshals Service said in a press release on Tuesday.

Crime Watch Daily joins forces with the U.S. Marshals Service to track down one of the men on the 15 Most Wanted List.

The Emile sisters travelled from Haiti for a better life. But sadly the violence they grew up around would follow them right to their Boston neighborhood.

Two pretty young sisters murdered execution-style. A terrified 2-year-old was caught in the middle of the gruesome bloodbath.

What the killer didn't know was there was someone else hiding inside the apartment.

Now U.S. Marshals are on a desperate manhunt for the fugitive they say is so evil, he's been named one of their 15 Most Wanted.

And Crime Watch Daily is closing in on where he may be hiding.

Violence was something sisters Stephanie and Judith Emile thought they escaped when they fled their home in Haiti. The Emile family, 13 brothers and sisters in all, moved to Boston with hope in their hearts of finding the American dream.

Stephanie Emile, 21, worked at a nursing home and wanted a career in medicine.

Judith, 23, loved to cook and worked at a restaurant.

The sisters finally saved up enough money to get their own place, and chose what they thought was a safe, quiet apartment building in the heavily Haitian community of Dorchseter.

So close, they shared secrets nobody else knew. In fact Judith was the only who knew Stephanie was dating someone.

Boston Police Sgt. Sean Doherty says he's still haunted by what he saw inside the sister's apartment the terrible morning of Nov. 14, 2011.

"I see Stephanie laid up in the corner. She appears to be shot in the back of the head, and she has a toothbrush in her hand, which leads us to believe she was actually brushing her teeth," said Doherty.

"The thing that struck me the most about this was when we were going through the evidence, there was actually a Bible that appeared to have been struck by a bullet, which would have meant that she had that Bible in her hand when she was shot," said Doherty.

What makes the sisters' murders even more disturbing: Judith was killed right in front of her 2-year-old niece she was babysitting at the time.

What the gunman didn't know was there was someone else inside the apartment. The sister, who we won't identify for her own protection, was in another bedroom when she heard the gunshots.

It was a gruesome crime scene two sisters gunned down execution-style while their 2-year-old niece witnessed the murders.

"It appears Judith was lying on the bed with the toddler actually reading the Bible when this whole thing transpired," said Boston Police Det. Sean Doherty.

The killer shows some mercy and lets the little girl live, but the toddler is forever scarred.

"She's going to be traumatized for the rest of her life," said Stephanie and Judith's sister Miralda Emile.

Thankfully the gunman did not know there was another Emile sister hiding inside the apartment. The sister, who we will not identify, still lives in fear of the killer. Police say she was in another bedroom and awoke to the horror of gunshots and the blood-curdling screams of her dying sisters.

The terrified sister manages to dial 911. Sadly the surviving sister tells says she never got look at the killer.

"She's terrified, she can't sleep at night, she has issues now over this, and she's scared to death because we haven't located him yet," said Doherty.

Police confirm to Crime Watch Daily there was no sign of forced entry. But who would want the sisters dead?

"The thing that's different about this case is they're true victims. They didn't choose a violent lifestyle," said Doherty. "They weren't engaged in any criminal activity, and it was a double-murder on two young women."

As the Boston Police Dept. began to collect forensic evidence, the entire Haitian community came together to grieve the sweet sisters -- including one mysterious mourner, a young man the family is shocked to find that Stephanie had been dating.

The young man's name is Jean Weevens Janvier , a local rap artist who lived around the corner with his brother.

It's not unusual for police to name a boyfriend a person of interest. But there was nothing suspicious in Jean's past to indicate he was capable of such a vicious crime. But as the Emile family prepared to lay their sisters to rest, cops get a tip that the mourning boyfriend is really an angry ex.

Rumors aren't enough to arrest Janvier. However, phone records are enough to make Janvier a prime person of interest. They show the jilted boyfriend is heating up Stephanie's phone just hours before the murders. Cops believe a slow burn turns into full-fledged rage. Then at the exact same time those 911 calls come in, radio silence.

"After the incident occurred there were no more phone calls to Stephanie from that number," said Doherty.

Investigators believe they know who did it. The problem is, he's fallen off the face of the Earth.

Police believe Stephanie Emile abruptly dumped Janvier for an old flame, and when she did phone records reveal Janvier began calling Stephanie non-stop in the hours leading up to the murders.

When Stephanie shunned him, police say, Janvier went to her apartment with a 10mm gun and opened fire. His girlfriend Stephanie was shot twice, once in the back of the head. Her sister Judith took four bullets while reading the Bible on the bed to their 2-year-old niece. She was spared.

Boston Police charge Janvier with two counts of first-degree murder. But when word spread that cops were coming for him, Janvier took off, and has been on the run ever since.

U.S. Marshals are now on the hunt to capture the fugitive so dangerous he's been elevated to their 15 Most Wanted List. Marshals say Janvier has ties in Haiti, Miami and Montreal. But the Emile family believes he stayed close to his family.

"I think his family is hiding him out," said Miralda Emile.

So Crime Watch Daily went to the home of his brother, looking for Jean, and answers. We were determined to get answers for the Emile family. But Janvier's brother declined to speak with us.

Authorities say if you do see Jean Weevens Janvier, do not approach him -- he may be still armed and he is indeed dangerous.

"We're not going to give up on this case," said Supervisory Deputy U.S. Marshal Don Freeman. "He's on the top 15 list for a reason. We're coming for him. We will find him."

Jean Weevens Janvier is described as standing 6 feet 1 inch tall, weighing approximately 150 pounds. He has black hair and brown eyes. He was born in Haiti, but is a U.S. citizen. He is believed to have relatives in Haiti and Montreal, although the marshals emphasized to us that they are not ruling out that he's still here in the United States. 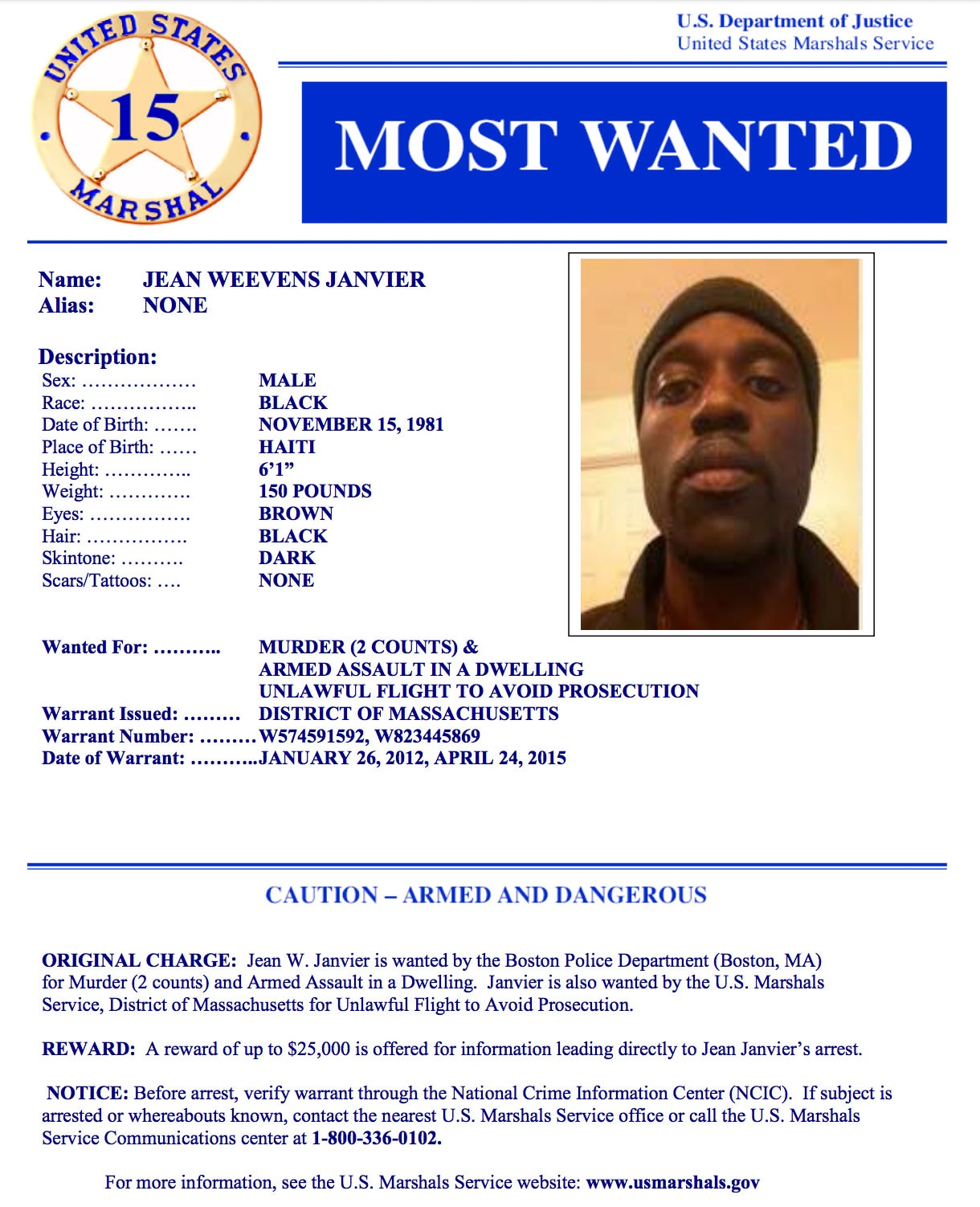