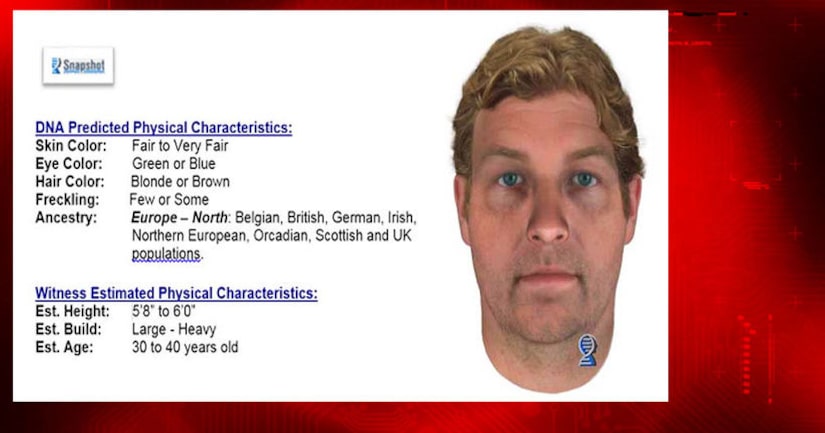 CARLSBAD, Calif. -- (KSWB) -- A composite image created using DNA evidence linked to the murder of a 39-year-old mentally disabled woman in a Carlsbad condominium a decade ago was released Tuesday in a renewed effort to find her killer.

A website dedicated to solving the cold case homicide of Jodine Elizabeth Serrin has also been launched. Serrin was found dead in the bedroom of her home in the 1900 block of Swallow Lane on Feb. 14, 2007.

Serrin's parents had gone to check on her that day after not being able to reach her by phone, and her father unknowingly interrupted the suspect engaging in an act of necrophilia with the body. He told the man to leave, then discovered his daughter was dead, according to the recently launched website, jodineserrin.net. She had been raped, beaten and strangled hours before she was found.

There were no signs of forced entry, which could indicate the victim knew her attacker, according to the website.

Investigators collected the suspect's DNA from the crime scene and turned it over to the sheriff's department's forensic lab. Although authorities had a genetic profile, the suspect's DNA did not match any known offenders in a national database called CODIS.

Carlsbad police and personnel from the county District Attorney's Office recently sought help from Parabon NanoLabs, a Virginia-based DNA technology company, which was able to speculate about the suspect's appearance and ancestry using DNA.

Parabon used its Snapshot DNA Phenotyping Service to determine the suspect's eye color, hair color, skin color, freckling and face shape and constructed a composite image of what the suspect may have looked like in 2007. That was then combined with an estimated age and body-mass index based on witness statements, according to police and Crime Stoppers. However, the suspect in Serrin's slaying remains at large.

Anyone with information on the case was asked to call the Carlsbad Police Department's Cold Case Team at (760) 931-2225 or leave a confidential tip via jodineserrin.net. Anonymous tips can also be submitted by calling Crime Stoppers at (888) 580-8477.

“We feel somehow, somewhere – he's out there. Somebody knows something – whatever that might be, that'll help,” said Jodine's father.