In a dramatic new development, Craig Scherf has finally been busted, swapping his white lab coat for jailhouse stripes.

"There's allegations, there's concerns that we might have had syringes being reused. We don't know what type of chemicals or substances were in those syringes, and so there's a serious public health issue," said Arizona Attorney General Mark Brnovich.

Craig Sherf was arrested and a grand jury is indicting the alleged con artist on 29 criminal counts.

Scherf has pleaded not guilty to all charges, including unlawful practice of medicine and fraudulent schemes.

More than 6 million Botox injections were performed last year, making it the most common cosmetic procedure in the country.

But what if you found out the doctor that put that needle in you isn't a doctor at all -- but is a convicted felon?

Crime Watch Daily teams up with Phoenix affiliate KNXV ABC-15 for a shocking undercover investigation about a guy known as "Doctor Craig."

A man in a white lab coat calls himself "Dr. Craig," and runs a cosmetic clinic in Tempe, Arizona, selling youth and making injections. The only problem is -- he's no doctor.

Craig Scherf is actually a convicted felon, and he doesn't have a state license to perform the medical and cosmetic services he advertises. In an exclusive ABC15 investigation, Dave Biscobing went after the alleged "Botox Bamboozler" at his offices, confronting him about his alleged shady business practices.

The door of the med spa says My Laser Center, but the reported doctor-imposter has a long list of other names for his business.

The medical clinic bills itself as a one-stop shopping hub, offering a variety of cosmetic procedures like Botox, tattoo removal and human growth hormone.

At first it all looks legit. The producer says she's interested in getting Botox. Scherf seems to be ready to inject her on the spot.

"I'm going to have you leave your purse and everything right here," Scherf says in the recording.

"Well hold on. I have a lot of questions," the producer tells Scherf in the recording.

After hearing his pitch, the producer tells the man who calls himself "Dr." Craig that she wants to think about it. But the smooth wannabe doctor won't take no for an answer.

"I have a couple of girls that are coming back for like the third and fourth time," Scherf says in the recording. "If you want to sit in, and watch them, they have no problem with people watching, because I've done it before."

In fact it was "people watching" who turned to ABC15 for help. One person, who asked us to obscure their identity, met Scherf professionally, and said he seemed suspicious.

"He could be giving somebody diseases. What if he's reusing needles? This guy could be really dangerous."

Dangerous and it appears the guy is raking in money. On Groupon.com he sold hundreds of coupons recently for expensive injectibles like Botox and Dysport.

"He makes up a lot of things," said Tempe Police Detective Lily Duran.

Dr. Craig is no stranger to the law or to playing doctor. Det. Duran was part of a 2011 sting operation that led to Scherf's arrest after he set up a medical marijuana dispensary.

"He wore a lab coat. He wanted people to believe that he was a doctor," said Duran.

Scherf was charged with possession and sale of marijuana. He pleaded guilty to a pair of felony charges but was only sentenced to serve two years of probation and pay thousands of dollars in restitution.

In addition to running the med spa, Scherf appears to run two coffee shops and a meat market.

But perhaps the biggest shocker is that in the early 1990s, he worked as a cop, and was terminated after two years.

"Our investigation showed that he was lying about a lot of things," said Duran.

Now more alleged victims of Scherf's reported cosmetics scam are coming forward with their horror stories. Client Mario Della Casa went in for injections but he came out bruised, with the side of his face sunken in.

"It certainly wasn't Botox or Dysport. I don't know what the hell it was," said Della Casa.

Mario sent pictures of his face to Scherf. The email he got back said "I've never seen anything like that."

Sharon Kirby went to Dr. Craig for what she thought would be rejuvenating jabs. She remembers the reported fake physician boasted about his credentials, saying that he was a doctor in Afghanistan, a Navy SEAL, and studied Eastern medicine.

"There was bruises, there was bleeding," said Kirby. "To me, that's -- he assaulted me. He should be in prison."

After the undercover visit, Biscobing called the office, only to be told Dr. Craig is out of town.

Biscobing sees him slinking out the building and tries to catch him. A few minutes later Biscobing catches up to him.

"It's not 'Doctor Craig,' it's 'Craig,'" Scherf tells Biscobing.

"Yeah, that's what people call me because I'm a laser tech and that's what I do," Scherf says.

When Scherf is confronted about his nonexistent medical license, more lies pour out of his mouth.

Scherf: I do laser procedures.

Biscobing: Do you license your laser procedures?

Biscobing: Not in Arizona you're not.

Scherf: Yeah I am. We've been licensed, and they license the machines, and our machines are licensed.

Biscobing: You need to be licensed to do it.

Scherf: We don't carry it. The licenses are with the state.

Biscobing: I checked your name.

Proof from the state board shows he's not.

"You're treating people with stuff you're not allowed to be doing," Biscobing says. "That's dangerous."

"I have naturopaths that do it, and I have other doctors that come in and do it," Scherf tells Biscobing.

"We run a legitimate place here, that's it. Plain and simple," says Scherf.

As legitimate as your medical marijuana club?

"We don't have a marijuana club," Scherf says.

"You ran one, you got busted for doing it."

"You're wrong there," says Scherf.

Since the investigation began, a lot has changed: 15 alleged victims have come forward. The state's attorney general is now investigating. So far no charges have been filed against Craig Scherf. His clinic has been shut down. 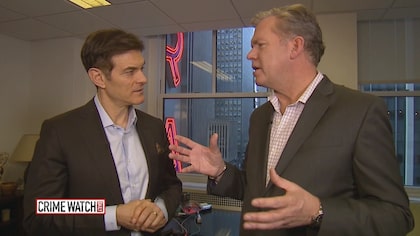