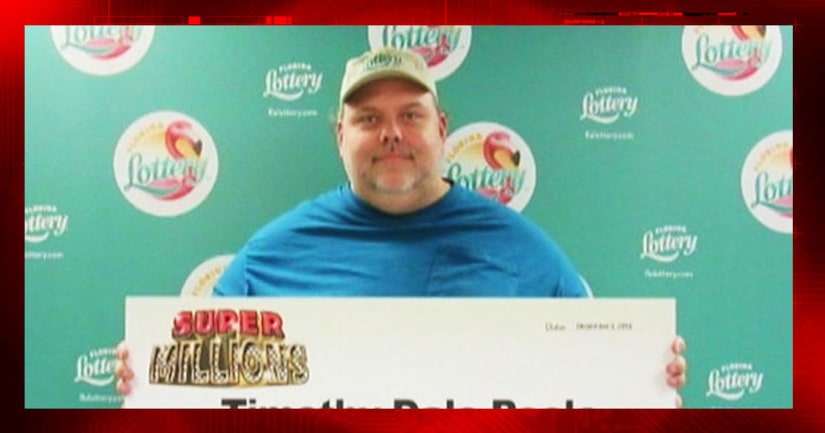 ORLANDO, Fla. -- (WKMG) -- A convicted sex predator who won a $3 million Florida Lottery jackpot has settled a lawsuit filed by his alleged victims.

The plaintiffs' suit against Timothy Poole, 45, was scheduled to go trial this week in Orange County Circuit Court. However, like many other civil cases, the parties were able to reach an agreement days before jury selection was expected to begin.

The terms of that settlement are confidential and have not been disclosed.

In December 2014, Poole struck it rich playing a Super Millions scratch-off ticket purchased at a Mount Dora 7-Eleven store. Lottery officials said he chose to receive his winnings in a one-time, lump-sum payment of $2,219,807.

A News 6 investigation revealed that Poole is a convicted sexual predator who is required to register his home address with the Florida Department of Law Enforcement.

In 1996, Poole was accused of sexually molesting two boys, ages 5 and 9. He served three years in prison after pleading guilty to the lesser charge of attempted sexual battery.

Poole insists he is innocent, despite entering a plea in the case.

"It may be hard for some to believe, but sometimes people are wrongly accused," Poole told Local 6 in 2014.

The plaintiffs claimed Poole, a family friend and babysitter, molested them multiple times in their home, his truck and at his house beginning in 1996.

"There is no price tag for something like that," the plaintiff's attorney, Mark NeJame, said after filing the lawsuit.

"One of the concerns our clients had was that this individual does not use the power of the money he's received to victimize others," attorney Jason Recksiedler told News 6 in 2014.

The attorneys said they were prohibited from disclosing details about the settlement agreement with Poole.

Poole was not at his Mount Dora home when a News 6 reporter stopped by Friday, according to an unidentified person who answered the door. Poole did not respond to an email and phone message seeking comment on the lawsuit settlement.

Less than a month before the civil case was scheduled to go to trial, Poole's attorney filed paperwork with the court requesting to be withdrawn as the lottery winner's lawyer.

"There has come an impasse in the handling of this case," Christopher H. Morrison wrote. "It is not possible for the client and attorney to continue to work cooperatively on the case."

Shortly after winning the multi-million lottery prize, Poole moved into a 20-year-old, $85,000 mobile home located across the street from his previous house, records show.

People close to Poole tell News 6 he used some of his winnings to expand his late mother's taxi cab business.

The plaintiffs' attorneys suggested the alleged victims and their family did not immediately sue Poole since the convicted sex predator did not have many assets prior to his lottery jackpot.

In 2010, Florida lawmakers eliminated the statute of limitations dictating when a juvenile victim of sexual abuse could file a civil lawsuit.

There is now no time limit for legal action to be taken if the victim was age 16 or younger when the sex crime occurred.

"But for that law being passed, my clients would have had no opportunity for recourse," Recksiedler said.

Under state law, sex offenders and predators are allowed to play and win prizes from the Florida Lottery.

After Poole's jackpot, some Florida legislators unsuccessfully attempted to pass a law that would have required any sex offenders' lottery winnings to be placed in an escrow account for a year, giving victims an opportunity to make a claim.