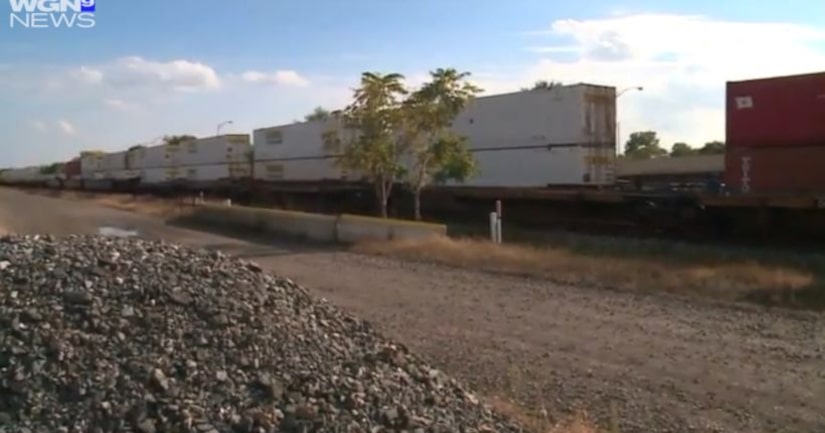 CHICAGO -- (WGN) -- Chicago streets are marked with the remnants of gun violence.

In a continuing look at how illegal guns are flowing into Chicago, WGN Investigates shows that modern day train robberies are bringing hundreds of guns to our city.

The train robberies of the past are legendary, glorified in the movies. There are stories of shoot outs and explosions. Unfortunately, it hasn't stayed in the past. Today, train robberies are still happening, perhaps with less drama, but every bit as serious. The weapon of choice is a simple bolt cutter while a train sits hidden in the weeds waiting to pass through some of Chicago's roughest neighborhoods.

It is a slow and meandering path to pass through the city, sometimes taking a full day to move through, says Senator Emil Jones III. During some of that time Jones says, “Trains are sitting in high-crime neighborhoods. It's just a potential target to get broken into.”

Thefts are happening. A lot - hundreds of times. WGN Investigates requested five years of Chicago Police records. What we found is that trains have been hit more than 400 times over that period. The loot hidden behind the doors could be anything from tennis shoes to serious firepower including ammo and guns. That immediately catches the attention of Alcohol, Tobacco, Firearms and Explosives – ATF.

The Special Agent in Charge in Chicago Jeffrey Magee says, “Some of the people who stole the guns could be looking for anything. They could be looking for computers, furs, coats, all of that.” But he adds, ominously, “It just so happened one car had firearms in it. You don't know, the cars are not marked with firearms.”

Thieves stole guns from trains in Chicago at least four times that we know of. In December, 2009, 319 guns were taken from 116th and Torrence. In May 2014, 13 guns were stolen from 61st and Lafayette.