Crime Watch Daily has new details on a manhunt underway for a fugitive murder suspect.

Former Army recruiter John Blauvelt took off from his home in South Carolina shortly after the death of his wife in October 2016.

There are now new surveillance-camera pictures of Blauvelt, 28, on the run. And police believe they may know where he is hiding now.

He's been on the run for almost two months. But the U.S. Marshals Service says he was recently recorded by security cameras in Oregon. One close-up is from an ATM and the second image is from a supermarket.

Crime Watch Daily first brought you the story of the AWOL U.S. Army recruiter charged with the brutal killing of his 22-year-old wife in South Carolina

Today lawmen say Blauvelt may have ditched his red GMC Yukon SUV. And they says the suspected killer may be hitchhiking trough California toting a military-style green camouflage backpack. They believe he keeps a low profile by camping in public parks, and is panhandling or looking for cash-only short-term work.

The body of Blauvelt's estranged wife Cati was found with multiple stab wounds in an abandoned house in Simpsonville, South Carolina. Police say that after being questioned in the case, Blauvelt ran off with 17-year-old Hannah Thompson, who they say had been living with him at his house after his separation from Cati.

Hannah Thompson recently surfaced, alone. Authorities say she left Blauvelt in Oregon and returned to her home in South Carolina. She has been interviewed by police, who are releasing no details at this time.

Prior to the homicide, Blauvelt was charged with domestic violence after threatening his wife Cati with a gun. Six months later, with their marriage not yet a year old, Cati was found stabbed to death.

Authorities fear Blauvelt may be armed. Blauvelt has military training and combat experience, and police warn that he should not be confronted by the public.

John Blauvelt stands 5 feet 8 inches tall and weighs about 185 pounds. He has brown eyes and brown hair. He has tattoos on each of his arms and on his chest. He has been known to go by the aliases Blue Blauvelt, John Bluefields, Vincent Mendoza and Victor Sacceti. 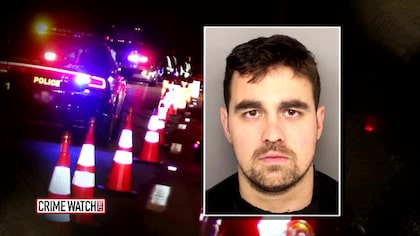