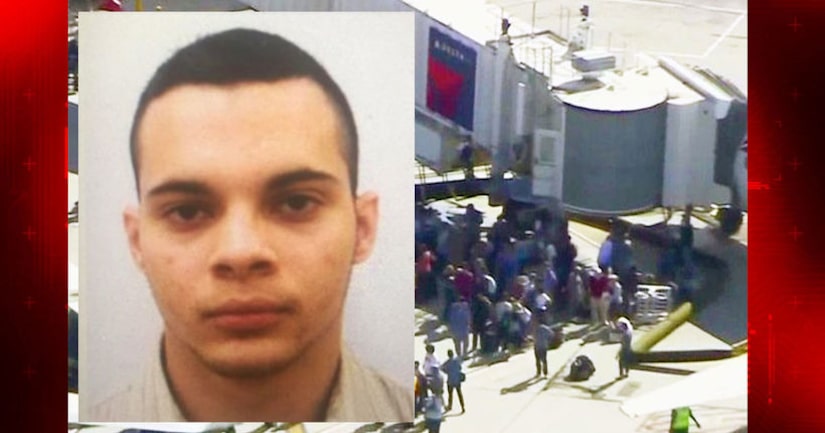 FORT LAUDERDALE, Fla. -- (WPTV/AP) -- A gunman opened fire in the baggage claim area at the Fort Lauderdale airport Friday, killing five people and wounding eight before being taken into custody in an attack that sent panicked passengers running out of the terminal and onto the tarmac, authorities said.

The shooting occurred inside Terminal 2, which serves Delta Air Lines and Air Canada.

"People started kind of screaming and trying to get out of any door they could or hide under the chairs," a witness, Mark Lea, told MSNBC. "He just kind of continued coming in, just randomly shooting at people, no rhyme or reason to it."

Lea said the gunman said nothing as he "went up and down the carousels of the baggage claim, shooting through luggage to get at people that were hiding." The killer had a handgun and went through about three magazines of ammunition, Lea said.

Then the attacker threw down his weapon and lay spread-eagle on the ground until he was taken into custody, Lea said.

A county official says the Fort Lauderdale airport shooter pulled a gun out of a checked bag, loaded in a bathroom and started shooting, killing five people and wounding at least eight.

Chip LaMarca, a Broward County commissioner, was briefed on the airport shooting by Broward Sheriff's office. He told The Associated Press by phone that the shooter was a passenger on a Canadian flight and had checked a gun.

LaMarca says the shooter pulled out the gun in the bathroom after claiming his bag.

Sen. Bill Nelson of Florida identified the gunman as Esteban Santiago and said that he was carrying a military ID, but that it was unclear whether it was his.

The airport suspended operations as law enforcement authorities rushed to the scene and emergency medical workers treated at least one bleeding victim on the tarmac.

People spilled onto the tarmac, some carrying luggage, and some ran from both Terminals 1 and 2, hiding behind cars or anything else they could find to shield themselves.

Paramedics could also be seen treating a bleeding victim outside the airport. Hundreds of people stood on the tarmac as an ambulance drove by.

What we know about Esteban Santiago, suspected shooter at the Fort Lauderdale Airport:

Authorities arrested Esteban Santiago, a 26-year-old man from New Jersey, in connection with the mass shooting.

Santiago was born in New Jersey and moved with his family to Puerto Rico when he was 2, the Associated Press reports. According to WFTS in Tampa. he is believed to be living in Lake Mary, Florida, a northern suburb of Orlando, Florida.

According to NBC News, Santiago had military ID on him during the time of the shooting. Santiago's brother told the Associated Press that the suspected shooter had served in the National Guard and was in Alaska receiving psychological treatment. Bryan Santiago also confirmed that his brother had been deployed to Iraq in 2010 and spent a year in Aguadilla.

Law enforcement officials told CNN the suspect showed up several months ago at the FBI office in Anchorage. He was interviewed and said he was hearing voices in his head, including some telling him to join ISIS. He was taken to a hospital for a mental health evaluation, the officials said. He voluntarily checked himself in, the officials explained.

Per ABC News, Santiago received a general discharge in August for "unsatisfactory performance."

CNN also reports that there may have been an altercation on the flight.