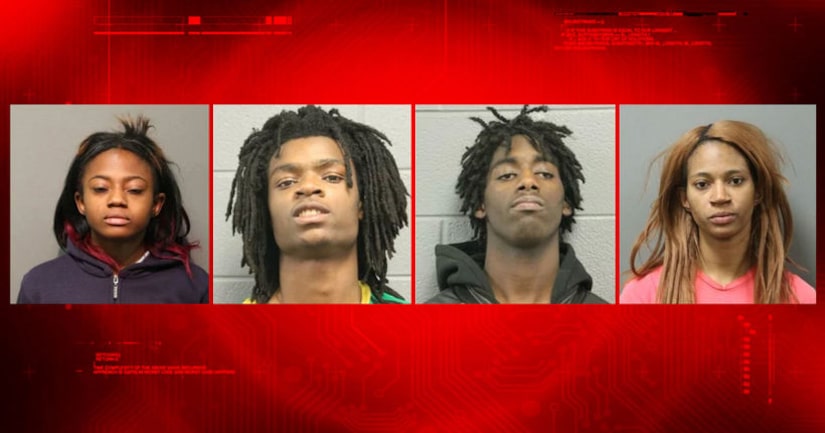 CHICAGO -- (WGN) -- Four people accused of torturing a mentally disabled man were charged with a hate crime and aggravated kidnapping among other charges Thursday.

The disturbing 30-minute video shows a man tied up and his mouth covered, cowering in the corner of room. His attackers laugh and shout "f--- Donald Trump" and "f--- white people" as they kick and punch him and and cut into his forehead with a knife.

Police say officers observed a disoriented male in "distress" walking in the 3400 block of West Lexington on Wednesday at about 5:30 p.m. After speaking to the victim, the officers then responded to a home nearby. There, they discovered “signs of a struggle and damage to property.” Police say the officers connected this evidence to the disoriented male.

The 18-year-old victim, who is from the northwest suburbs, was taken to the hospital and is in stable condition. He apparently knew one of the suspects.

“Officers later became aware of a social media video depicting a battery of an adult male which is believed to be the same individual,” police said in a statement.

Police in Streamwood say the victim's parents dropped him off at a McDonald's on New Year's Eve. His parents reported him missing after they didn't hear from him again.

Police also say the suspects stole a van in the suburbs and drove the victim into the city.

Earlier Thursday, Chicago Police Department spokesman Anthony Guglielmi said that the four black suspects made “terrible racist statements” during the assault but that police believe the victim was targeted because he has “special needs,” not because of his race.

The four suspects are scheduled to be in bond court Friday.