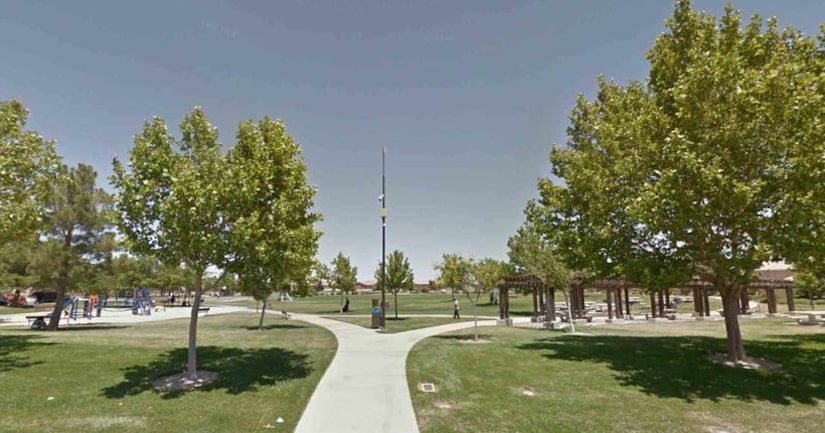 VICTORVILLE, Calif. -- (KTLA) -- A mother has been arrested on suspicion of child cruelty after an unsupervised 2-year-old was found surrounded by a pack of dogs at Brentwood Park in Victorville, police said Wednesday.

Law enforcement personnel were sent to the park, located at 14026 Hook Blvd., around 10:15 a.m. Wednesday after receiving a report regarding a toddler there who was surrounded by dogs, according to a Victorville Police Department news release.

The sergeant who was the first to arrive discovered the child was wearing only a soiled diaper in the wet weather, the release stated. He was surrounded by approximately seven dogs, who were very protective of the little boy as a sergeant tried to get the boy of the rain and cold.

After safely removing the child, authorities located the toddler's home a short distance away from the park. When they arrived, they found the front door open and the dogs from the park inside.

The children's mother, identified as 26-year-old Cassandra Bustamante, as well as two young siblings, were inside the home at the tome. Bustamante was apparently sleeping when her son had left the residence, and was unaware he was gone, according to the release.

Police requested a response from Child and Family Services because of the circumstances surrounding the call, and due to the home's overall condition, authorities said.

Animal Control officers also responded to the residence to the handle the dogs and ended up shooting one of the dogs after he or she “became very aggressive and lunged” at the sergeant, then tried to bit him, the release stated. The dog survived and was last reported to be in stable condition.

Bustamante was arrested and booked into the High Desert Detention Center on a child cruelty charge, according to police.

The three children were eventually released to the custody of their father.

Anyone with information about the incident is call the Victorville Police Department at 760-241-2911.

Callers wishing to remain anonymous are encouraged to contact the We-Tip Hotline by dialing 1-800-782-7463, or by leaving information on the We-Tip website at wetip.com.