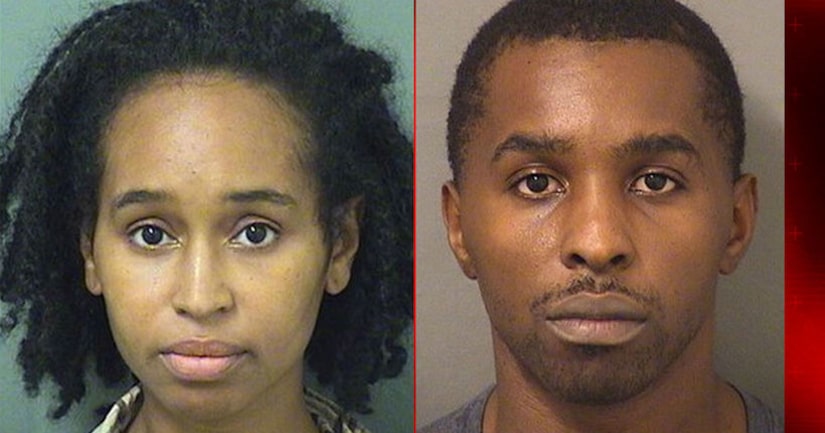 GREENACRES, Fla. -- (WPTV) -- Two people were arrested Saturday after five malnourished children were found living in a car parked at a Walmart in Greenacres.

A Palm Beach County sheriff's deputy said he was on routine patrol at 10:50 a.m. when he spotted a blue Toyota in the parking lot.

The driver of the car, identified as Donell Barron, 34, told the deputy that he and his family lost their home in Port St. Lucie about a year ago.

The registered owner of the car is Rikki Hart, 34, but the report doesn't state what her relationship is with Barron.

In that time, Barron told the deputy that his five children, ages 14, 8, 6, 5 and 4, had been bathing in the Okeeheelee Park bathrooms and urinating in a bucket that is carried in the car.

The children, who do not attend school, were all found to be underweight with their bones visible and lethargic, according to the PBSO report.

Barron said the children were only fed once a day and mostly vegetables.

PBSO said when they went to McDonald's to buy the children some food, the children “ravenously ate the meals, as if they had not been fed in quite some time.”

Greenacres Fire Rescue responded to the scene and determined the children needed to be transported to Palms West Medical Center and placed them in custody of the Florida Department of Children and Families.

PBSO says both Barron and Hart appeared to be in good health with relatively clean clothing despite the conditions of their children.

The couple have a blog created in 2014 called "Holistically Beautiful" that says was created "to show the benefits of living a healthier lifestyle and discuss topics which can enrich ones' life."

Both were booked into jail Saturday and face child neglect charges.