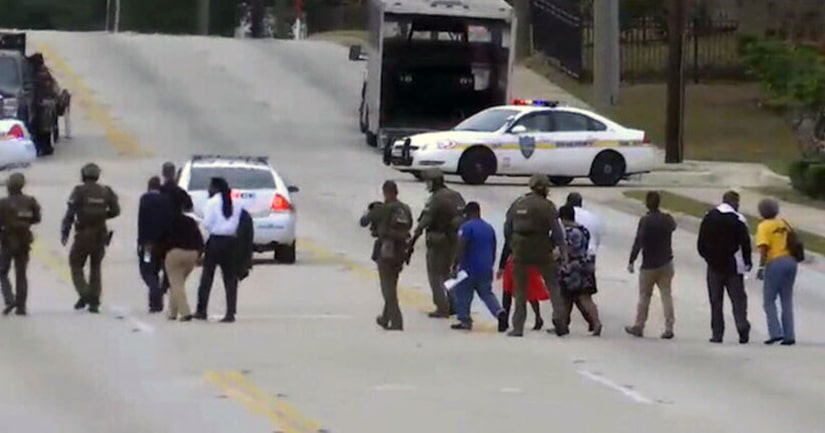 Hostage taker in custody; No reports of any injuries, police say

JACKSONVILLE, Fla. -- (WJXT) -- A bank robbery suspect who took hostages Thursday morning inside a Community First Credit Union on Edgewood Avenue West is in custody and the 11 hostages were freed safely, according to the Jacksonville Sheriff's Office.

Williams said the man, whose name has not yet been released, surrendered as soon as he saw the SWAT team members. News4Jax crews at the scene watched as the 11 hostages were escorted out safely by SWAT officers about 11 a.m. Thursday.

“Those guys work and train hard every single day for days like today,” Williams said. “And it paid off today. We were able to not only resolve it but resolve it peacefully through some really professional expertise to be able to make the right decision at the right time.”

The situation began at 9:03 a.m. Thursday when officers responding to a reported bank robbery at the credit union saw the robbery in progress and called for backup and the SWAT team.

Williams said SWAT members arrived and made contact with the hostage taker, who made some demands, including that he wanted some family members to be brought to the scene.

Williams said the hostage taker let a few hostages go during negotiations with SWAT members, but continued to threaten the people inside the bank, leading SWAT command to decide to storm the bank at their next opportunity.

Williams said the hostage taker will face charges ranging from bank robbery, to armed kidnapping and aggravated assault, depending on the outcome of the investigation. He said the man came into the bank with a dog, but that the dog was unharmed and is now in the care of Animal Control.

Ambulance and fire rescue trucks on standby near the bank robbery at the Community First Credit UnionDuring the incident, loved ones of those inside the bank gathered outside the perimeter anxious for any information about the people inside.

A woman who said her sister was working inside the bank said she watched, relieved, as her sister was escorted across the street by police after the standoff ended. The woman said she hadn't been able to speak to her sister yet, but that she looked OK.

“It's sad," the woman said. "You have to grab your family and let them know you love them, because you never know.”

Another woman whose sister also worked in the bank said she had been scared all morning as the situation unfolded.

“This morning I was really scared and nervous just thinking that something could have happened to her at her place of employment," she said. "Once I saw her it was a relief to know that God brought her out of this situation. Not just her but everybody who was in that bank.”

Edgewood Avenue West near Lem Turner Road and other area roads remained blocked. The immediate area, including nearby businesses, was evacuated during the standoff, and officers asked everyone to stay away from the bank and to not take any photos or videos of SWAT positions, as it could pose a danger.