Lone Tree police said she purchased a handgun Tuesday afternoon one hour before picking up her boys at their schools and then going missing.

Police found that handgun inside the minivan where the three bodies were found Wednesday morning. The Douglas County coroner said the manner of their deaths remained under investigation.

Friends and neighbors of the family from Highlands Ranch remain in shock over the loss. A private vigil was held Wednesday night.

Laber, 38, was reported missing at 8 p.m. Tuesday by her husband, Ryan Laber, after not returning home with her sons, 3-year-old Adam Laber and 5-year-old Ethan Laber in the 9400 block of Hibiscus Drive.

Laber was last seen picking up her sons from Bear Canyon Elementary School in Highlands Ranch about 2 p.m. Tuesday. The Douglas County Sheriff's Office said the children were pulled out of a school about an hour early, but it's not known why.

A 2011 silver Chrysler Town and Country minivan matching the one being driven by Laber was found next to a secluded loading dock of a closed Sports Authority store at 7848 E. County Line Road on Wednesday morning.

The bodies of Jennifer Laber and her sons were found inside.

Neighbors placed three red balloons in front of the family home. Some delivered trays of food for Ryan Laber.

Investigators continue to say they have no suspects and there is no threat to the community. The people who know the family have only prayers.

“Everybody's blindsided,” family friend Brandon Tartler said. “We had no indication. No abrupt behavior by any means. Just blindsided. Just thoughts and prayers”

No plans for services or a memorial have been announced. 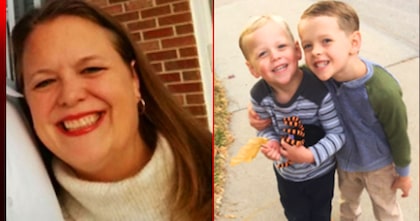