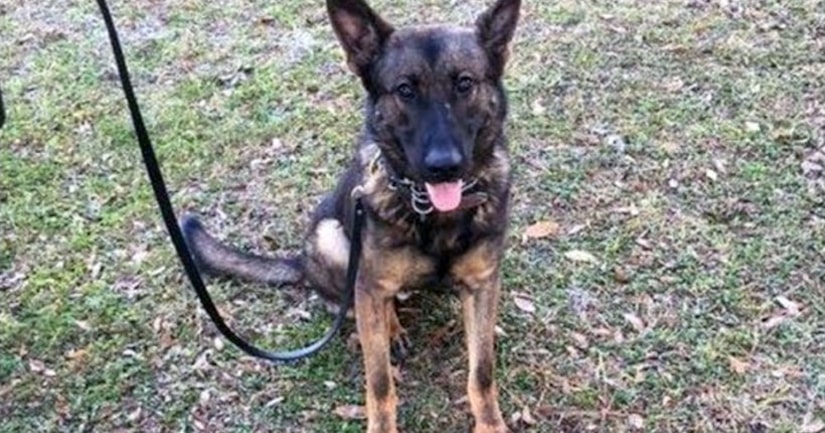 The K-9 unit, named "Forrest," was shot about 7:15 p.m., while responding to a call about a fleeing suspect in Deltona, Volusia County Sheriff Ben Johnson said.

Deputies withheld the man's name until about 2:30 p.m. Wednesday when they identified him as 34-year-old Eddie Powell. He was arrested at about 3 p.m.

The man was shot multiple times by a Seminole County deputy and is receiving medical attention, deputies said.

"We're very happy he's in custody and I don't have much sympathy for him," Johnson said.

Powell, who is originally from Georgia, hid in the woods near Vann Park while about 150 law enforcement officers, including several from Flagler County and Winter Park, conducted a manhunt that spanned through Tuesday night and into Wednesday afternoon, deputies said."He's armed, and he's dangerous," Johnson said during the search.

Johnson said during a press conference following the arrest that Powell at one point was hiding and that officers almost stepped on him before Powell jumped out and reached for his firearm. A handgun was recovered from the scene after Powell's arrest.

People in the area of Vann Park were asked to stay inside with their doors locked Tuesday night as authorities searched for the man.

Tuesday's order of events started in the area of Normandy Boulevard and Hancock Drive, near Vann Park. Deputies were in the area looking into a tip from Crime Stoppers about a wanted fugitive at a home on Wing Terrace.

The fugitive wanted for violating her probation was not home.

As investigators lingered outside the house, Powell drove by recklessly on a white dirt bike, according to a Sheriff's Office news release.

When a deputy tried to stop Powell, he took off, authorities said. Investigators didn't go after him, the sheriff said. A short time later, Powell drove by recklessly again, and disappeared again. The dirt bike was later found nearby, according to deputies.

As deputies contacted people inside the house, where they believed the fugitive was, they heard someone jumping over fences, the sheriff said.

Deputies set up a perimeter, and the Sheriff's Office Air One helicopter spotted Powell in a nearby wooded area, officials said. Forrest was tracking the man when the man opened fire, prompting deputies to return fire, according to officials.

It's unclear whose bullet hit the K-9 unit. Forrest was rushed to DeLand Animal Hospital, but couldn't be saved, officials said.

Two helicopters were involved in the suspect hunt Tuesday night. One was spotted circling with a search light activated. Two flash bangs were also heard.

Winter Park police were among the other agencies assisting the Sheriff's Office.

He was released from prison two or three years ago, officials said.

Deputies in Millen said Powell still has family in the Millen area and they're not sure why Powell would be in Deltona.

In Florida, killing a police dog is a third-degree felony punishable by up to five years in prison.

Forrest is the ninth K-9 unit to die from gunfire this year in the U.S., according to the Officer Down Memorial Page, which records the deaths of law enforcement officers and their police dogs.