A sudden disappearance. A dogged investigation. And a frantic search for an answer to the question: What happened to Kayla Berg?

Berg was just two weeks away from her 16th birthday, a milestone the Antigo, Wisconsin teen would never celebrate.

Kayla had one friend in particular that Hope Sprenger, Kayla's mother, says she did not approve of: Kayla's 19-year-old boyfriend, Miguel Marrero. He was four years older than Kayla.

"Miguel's house was kind of a party spot," said Antigo Police Chief Eric Roller. "The kids from Antigo were going there on a regular basis, every weekend at least, and had a lot of girls and young people living at this house."

Hope Sprenger says she didn't want her daughter to be one of them. So she took drastic action, moving Kayla about as far south from Antigo, Wisconsin as they could get, to Lampasas, Texas. Unfortunately, circumstances back home wouldn't let them go so easily.

"We had ended up coming back up here, her dad was not doing well," said Hope. "I felt the need that she needed to be by her dad in case something did happen."

That's a decision she now says haunts her. It was August 11, 2009. Kayla and Hope had only been back for a little over a week when Kayla told her mom she was going out.

Then, at some point, Kayla made contact with a 24-year-old man named Kevin Kielcheski.

"Kevin Kielcheski was a friend of Kayla's older brother," said Hope. "They would all kind of hang out together."

In fact, the rumor was that Kielcheski hung out with a lot of the teens around town.

"Everything we had heard, he was kind of on a level mentally maybe closer to these 15, 16-year-old, 17-year-olds that he was hanging around with," said Chief Roller. "I think maybe a lot of the younger kids were taking advantage of him. He could get the marijuana, and he was giving rides, and it sounded like that happened on a regular basis."

It's what Kevin later says happened that night with Kayla. She called him for a ride, and he offered to throw in a little extra as a "welcome home" gift.

"She wants to go see her friend Miguel in Wausau and Kevin said he agreed to take her to Wausau," said Roller.

But first, Kayla asks to make a quick stop to see a friend at McDonald's.

"They saw Kevin with Kayla at the McDonald's. He was waiting for her in the car, but they were together, and that's the last person besides Kevin that we know has seen Kayla. Kevin says he drove her over to Wausau, about 40 minutes away, and dropped her off at Miguel's house."

The next day, Kayla was gone. But it wasn't until nearly a full week later before anyone realized it.

"We had a lot of different stories on when somebody did really see her last," said Roper. "Kayla did spend a lot of time with her friends too and would go between houses and may not come home for a couple days. Initially we were going, 'Oh, no, she was just floating between friends.'"

Sadly, that would become wishful thinking. Already a week behind when Kayla is reported missing, police start retracing her last-known steps. And the trail leads them to the last place she was supposed to be: with Miguel Marrero.

Police bring Marrero in for questioning, but he tells them he hasn't seen Kayla, that she never came over that night, and he never admits to even having had a sexual relationship with Kayla.

Not long after that, Miguel Marrero "lawyered up." But he wasn't the only one police wanted to talk to. If Marrero was telling the truth, that made Kevin Kielcheski the last-known person to see Kayla alive.

The problem with Kielcheski's story of dropping Kayla at Marrero's house? The address he gave police wasn't even where Marrero had been staying.

"When he got dropped off at the house, it was condemned," said Roller. "There was issues with water coming into the house and they were told they couldn't be in the house until they had some processes fixed.

"That's very suspicious, and her friends have told us after that she was aware that he wasn't at that house," said Chief Roller.

But Kielcheski insists that's where he dropped Kayla off, and there was no evidence to say otherwise. However, that didn't mean he was home free. He was eventually arrested for reckless endangerment.

"That was for his activity of taking a 15-year-old girl, smoking marijuana with her and leaving her at a house that he wasn't sure she got to," said Roller. "It was dismissed in court. They felt that there was not enough evidence. We didn't have a victim at that point, because we don't have Kayla. We don't know where she's at."

A question hundreds of tips, and multiple searches over several years have yet to answer.

It's been seven years since Kayla Berg went missing.

Police have also questioned both Marrero and Kielcheski. And while police say neither man has been officially ruled out, the case remains unsolved.

This year, a video posted to Youtube just two months after Kayla's disappearance, was discovered. It was not seen until years later. It shows what appeared to be a crazed man discussing his new girlfriend, saying her met her at a mall, then brought her home. The video then shows the man opening a door to a bathroom, with a young female inside chained to the floor, who screams "Why are you doing this? No!" The video cuts to black shortly after. Many people, including Kayla Berg's own mother, thought the girl looked eerily familiar.

"Every tip we take seriously, and it was kind of a creepy video anyways, but then when you have the mom saying that it's, you know, definitely could be my daughter, we did whatever we could at that point to try and locate that video and who made that video," said Chief Roller.

After an exhaustive search, a break.

It was all just a tragic coincidence.

"We had made contact with the producer and the two actors in the video," said Roller. "Both of them agreed that it was completely voluntary what they were doing, and were just trying to produce these 'scare videos' that they put out."

If there's any good to come from the video, it's that it brought new exposure to Kayla's case.

In the meantime, investigators are back to square one, with no new leads or suspects.

"[Kevin Kielcheski] is always still going to be a suspect until we know different, I think, mainly because of his actions and being the last one that we know of that saw Kayla," said Chief Roller.

Kayla's mom says there's something else that makes both men highly suspicious in her eyes.

"They had refused a lie-detector, and that's kind of where we sit with him," said Hope. "We wanted to schedule for [Kevin] to do a lie-detector with the FBI. So we had all that scheduled. Well, then there was an excuse. 'Oh, well, he took a Vicodin, or he took a Xanax,' so he couldn't do the test. Finally he's really not -- he's not going to come in and do it. And we can't really make him."

Kevin Kielcheski did apparently have a test done later by a private firm, and passed.

Crime Watch Daily went searching. We weren't able to make contact with Miguel Marrero, who to this day has never been charged with anything in connection to Kayla Berg's disappearance.

But we found Kevin Kielcheski outside his place of work.

Kielcheski has publically denied having anything to do with Kayla's disappearance.

Today, Kayla Berg would be 23. A composite image of what she would look like today has been released. (See below.)

The FBI has offered a $20,000 reward for information that leads to the arrest and conviction of anyone responsible for Kayla Berg's disappearance. 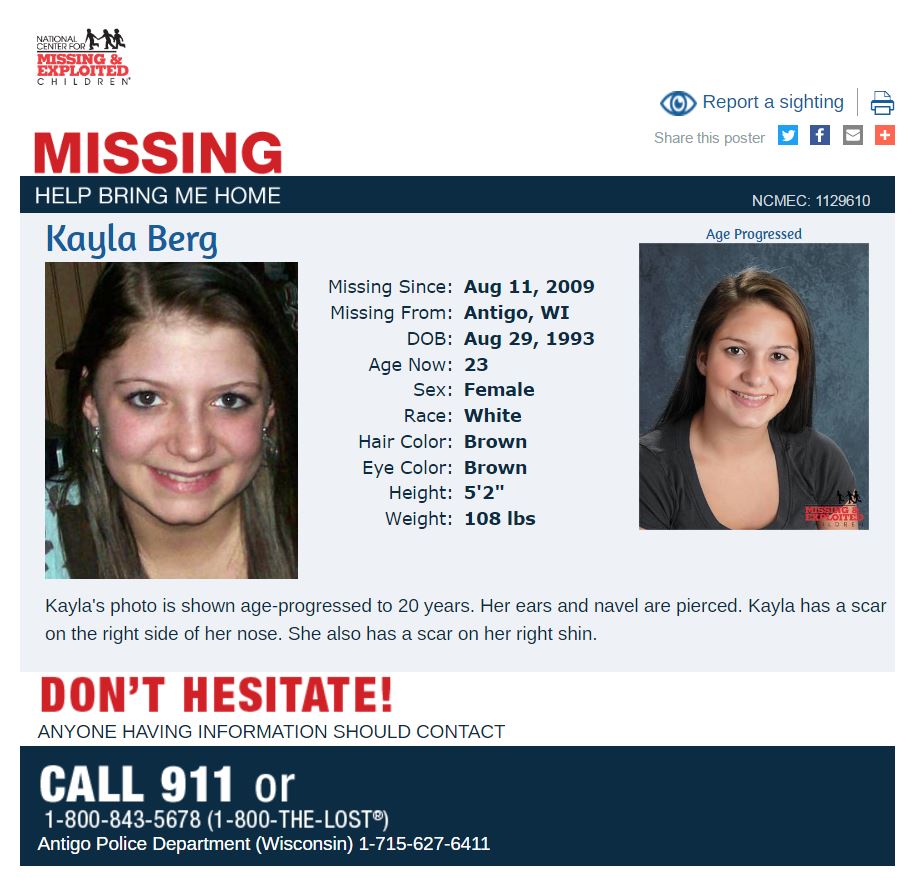 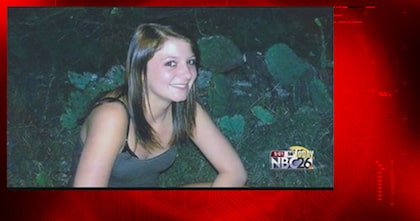