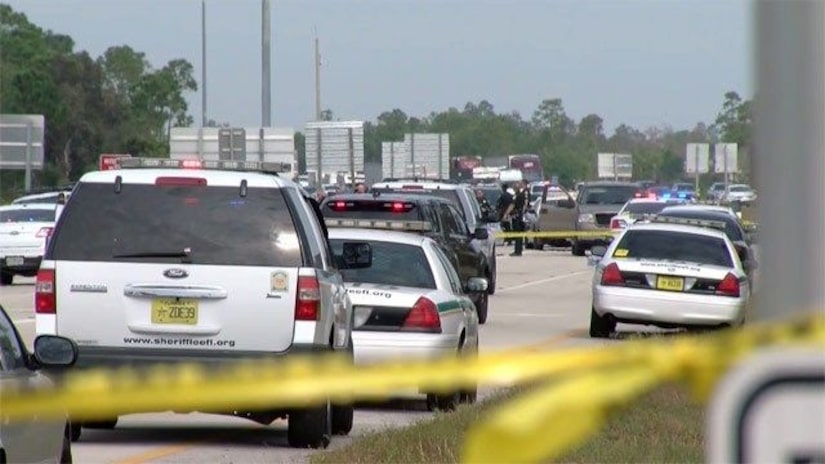 ESTERO, Fla. -- (WBBH) -- A suspect is dead and a deputy is in the hospital after a shooting took place on I-75 near the Corkscrew Road exit, according to Lee County deputies.

Witnesses who say they saw the whole thing happen told WBBH a deputy tried to pull over a man near the exit.

The suspect drove off in his vehicle, reaching speeds up to 100 mph. Eventually the driver got out of his car and attacked the deputy. Witnesses say that's when a third person came over and shot the suspect.

"My husband was honking his horn to try and stop the guy to get some attention from him, and another guy with a blue shirt came out with a gun," said Shanta Holditch.

Holditch described the scene that closed the Corkscrew Road exit for hours. It backed up traffic along I-75 for miles, and left one person dead.

"The officer had his flashers going and trying to follow the guy, and as soon as we got off the ramp, the guy stopped. The officer stopped," recalled Holditch.

Witnesses saw the driver attack a Lee County sheriff's deputy before they say another man ran up with a gun shouting at the suspect to stop.

"The officer opened his door, and the guy got out and ran out and grabbed the officer out of his car and started beating him profusely, throwing him to the ground and punching him in all different directions," said Holditch.

"I heard like three shots. He fell down on top of the police officer," said Mr. Smith, a witness. "After a moment, the police officer rolled him back over, got on his mic, then rolled over back on the ground besides the guy."

The scene covered miles from the I-75 S Corkscrew Road exit to where the law enforcement helicopter landed twice. Two miles ahead, Florida Highway Patrol and cadets were seen canvassing for evidence.

"The guy that protected, shot the bad guy, was a guy that pulled over on the ramp and saw the guy beating the officer. He pulled out his gun," said Smith.

It is unclear if that person was a Good Samaritan or an officer not in uniform. The deputy who was attacked was rushed to the hospital, but he is expected to recover.

WBBH-TV's Sky2 video of the scene shows two vehicles. Both cars remain at the scene and have been central to the investigation with crime scene technicians in and out of them.

The whole scene backed up traffic along the interstate for miles and closed the exit. Investigators remained on the ramp looking for evidence. The southbound exit ramp at Corkscrew Road was scheduled to remain closed until 9 p.m. Troopers advised drivers to use Three Oaks Parkway and US-41 as alternate roadways.