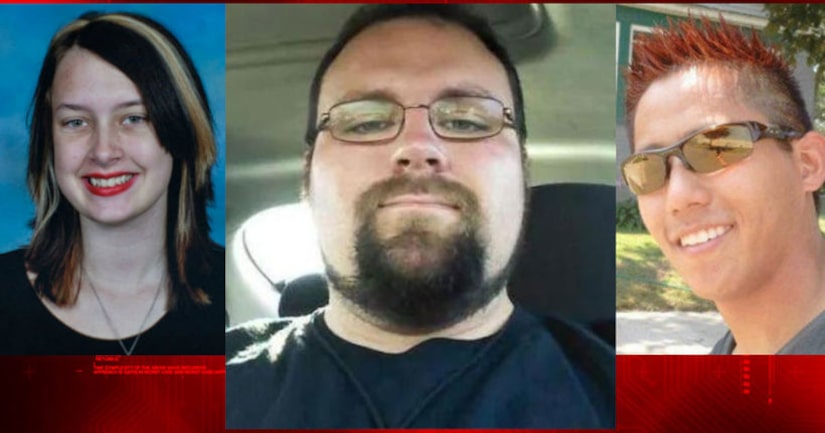 A Michigan crime scene was so horrific that a special crisis-intervention team was brought in for the police just so they could deal with what they just saw. And it all started with a desperate ad on Craigslist.

On the outside, it looks like a typical suburban home on a quiet street in Grand Rapids, Michigan. But behind the walls is the secret lair of a twisted sadist.

"This is a tragedy of the worst kind. We have three victims," said James Carmody, chief of the Wyoming, Michigan Police Department.

Who brutally murdered a young couple and their unborn baby in July 2014?

In disturbing video released by police, 31-year-old Brady Oestrike is seen adjusting bondage gear, chains and ropes, even preparing lingerie for his victim to wear in the basement.

He's built a house of horrors, the place where Brooke Slocum, a pregnant teenager, would draw her last breath. But how Slocum got there is a sleazy tale of sex-for-cash deals, allegedly brokered by a couple on Craigslist. Activities which the teen's father says were orchestrated by her boyfriend, Charles Oppenneer.

"She did some pretty unspeakable things for him that she thought was out of love," said Greg Slocum, Brooke's father. "That's not love, that was manipulation."

Brooke and Charles reportedly met Oestrike, who worked as a supervisor for a gas company, in a sex chat room.

The couple, broke and desperate for cash, struck a shocking deal with the stranger: Offering up sex with the eight-months pregnant Brooke for money.

Brooke, hesitant about meeting in the park, responds: "Hmmmm ... I dunno I don't wanna get in trouble for indecent exposure or anything."

Oestrike then assures her, "It's cop-free." They later agree to meet at midnight.

"A meeting for sex was arranged at Gezon Park. The conversation also confirms that Oppenneer was to be present at the meeting. Oestrike offers to pay the victim for sex," Police Chief Carmody.

That meeting was the last time Brooke and Charles would be seen alive. Cops launch a desperate manhunt. But there's no sign of the couple. Soon after, police make a gruesome discovery under a tree branch: the headless body of Charles Oppenneer. Brooke Slocum is nowhere to be found.

Detectives then trace the couple's Craigslist activity back to Oestrike.

Cops put the 31-year-old's home under surveillance, but tragically, while the search warrant is being secured, Oestrike is unleashing unspeakable horrors on the young expectant mother trapped in the basement. Investigators say that after decapitating Oppenneer, Oestrike drove the pregnant teenager to his home, where he put her in handcuffs, wrapped a chain around her neck and hooked her arms up to the pulley system suspended from the ceiling. Then he sexually assaulted and tortured her, capturing the entire ordeal on film, before strangling the teenager to death.

"This is not a characteristic of our community, certainly it's an anomaly," said Chief Carmody.

Eventually Oestrike realized cops were closing in and took off in his car, leading police on a high-speed chase, with Brooke's dead body stuffed in the trunk. After crashing his car into a railing, Oestrike fatally shoots himself while sitting behind the wheel.

"To think this was going to be my first granddaughter and to have lost her is just every nightmare come true," said Greg Slocum, Brooke's father.

Newly obtained pictures from inside Oestrike's home show a revolting pig sty. The house was filled with every kind of weapon imaginable, including bizarre items like a baby doll and medieval armor. Dozens of firearms, ammunition, numerous knives and other weapons were also found.

Oestrike was from a well-off family, and even did mission work for his local church. But reportedly, as he got older, Oestrike became a loner. A former roommate recalls a disturbing conversation they had that forced her to move out.

"He told me he was having thoughts about killing me and he was warning me. He's like, 'These thoughts are happening to me,'" said Rachel Morris.

And as the families mourn the loss of their loved ones, shockingly Brooke Slocum's father says he does not blame Oestrike for the savage slaying of his daughter.

"I forgive Brady Oestrike for what he did, because it's not for me to judge. We don't know the conditions in his life that made him create such a terrible crime," said Greg Slocum.