Thursday, Aug. 23, 2018 marked the final hearing for Donald Cline, the former Indiana fertility doctor who used his own sperm to impregnate patients without their knowledge, WXIN reports.

At Thursday's hearing, Cline's medical license was surrendered. The board said he can never apply for a license in Indiana again.

A Marion County judge gave Dr. Donald Cline a one-year suspended sentence, but ruled his actions justified him having a felony criminal record. The 79-year-old doctor had pleaded guilty to two counts of obstruction of justice and faced up to three years in prison on each charge, WITI-TV reports.

A fertility doctor accused of blindsiding his own patients, confessing in court documents to using his own sperm with his patients as many as 50 times.

It's a family reunion no one ever expected: Adults who only recently learned the shocking news they are related. Their bond is written not in blood or love, but in the laboratory. They all claim they are donor babies sharing the sperm of one man, their mothers' fertility doctor.

White is one of several moms who are making the sensational claim that Dr. Donald Cline artificially inseminated them with his own sperm.

You wouldn't think a story like this could come out of America's heartland, Indianapolis, Indiana. Back in the early 1980s, fertility science was still in its infancy. And in Indianapolis, Dr. Donald Cline was the expert.

Liz White says Cline was the only fertility specialist for miles around.

"I worked at a hospital, so obviously I worked with a lot of physicians," said White. "He was the top infertility specialist in Indianapolis. I clearly remember him sitting behind his desk and he's looking at my husband and he says 'You have dark hair, dark eyes, and you're about six foot. OK, I will look for a donor around that type.'

"And he was very helpful, and I took his hope as hope, so I started coming in," said White, who went in for 15 treatments -- three times a month for five months.

White says Cline told her medical students would provide a fresh donation, because frozen sperm was not an option.

"We were told they were going to be residents, sperm from residents from interns at the hospital across the street, and that our payment of cash or check was to protect the anonymity of that person," said White. "I think if he said 'Well I'm gonna donate my semen to you,' I would have been like creeped out. I was 29 years old and I was two years and some into the fertility process. I would, you know, have walked out, but he said he had the expertise at being the best fertility physician in Indiana and he was the only one practicing with live sperm."

"It was when I came home from high school one day. We were in science class learning about Punnett squares and probabilities of blood types, and what my blood type was based upon my parents," said Matt. "So when I brought up that topic to ask them what their blood types are, that's when they told me."

Matt says he never tried to learn his biological father's identity until he saw a news report on TV, the explosive investigation into the claims about Dr. Cline from Crime Watch Daily Indianapolis affiliate WXIN-TV.

"I immediately looked up where his office was, and I remember my mom and I driving by and saying 'Oh, that's the office building I got pregnant with you in,'" said Matt.

Matt says after watching that report he did his own DNA test. He sent it to an online testing site.

"I went to the section to look at the relatives, and just having a whole laundry list of half-siblings is kind of shocking," said Matt. "I think the total unconfirmed account is 13 right now."

Jacoba Ballard says she is one of Matt's half-sisters. Like Matt, Jacoba did her own DNA saliva test.

"The first set proved that I had seven siblings -- that's not counting my half-sibling from my mom, nor Dr. Cline's four children, which I didn't know that the time," said Jacoba. "Some of my other siblings and I started researching because we knew something didn't add up. One, he told all of our mothers the same thing, he also said that he used a medical resident."

When Jacoba's mother Deborah Pierce read the results, she was floored.

"I do feel violated. He was my doctor and you just don't do that to your patients, that's not morally right at all, it's not ethically right," said Pierce.

And that's the sentiment from Julie Manes, another of Dr. Cline's alleged daughters. She says she worries about the impact on her own children. Her concern for them is that they might date or have relationships or even marry one of their first cousins.

"If it comes to that point, I think I would have to ask their parents personal questions regarding whether they were artificially inseminated," said Manes.

Julie Manes did her own DNA test and says the results showed Jacoba is her half-sister.

"When I clicked on DNA relatives and then an entire page showed up of half-siblings -- 'Wait a minute, I only have one sibling, and he's adopted," said Manes. "It was very mind-blowing and shocking, to say the least."

Now that the family secret is out, what can be done?

It'S supposed to be one of the most special moments of a couple's life, but several Indiana women say their visit to a fertility specialist ended in an absolute nightmare when they found out the doctor used his own sperm instead of donors'.

Crime Watch Daily decided to track Dr. Donald Cline down to see what he has to say to his alleged victims.

The secret might have died with the 77-year-old Dr. Cline if it wasn't for the hard-hitting reporting by Crime Watch Daily Indianapolis affiliate WXIN. In an investigation that spanned over a year and a half, Angela Ganote uncovered Dr. Cline's alleged fraud.

When that report aired, it apparently upset the grandfatherly fertility doctor.

Dr. Cline called Jacoba Ballard. She recorded the phone call. Cline admits during the call that he donated his own sperm on several occasions.

"I thought I was doing the right thing," Cline says on the recording. "I only donated my own sample maybe nine or 10 times, and it had to do with blood-typing, and at the time there was no sperm banks that I could refer the couples to."

Cline then tells Jacoba his marriage is on thin ice and asks her to try to stop the TV station from reporting the allegations.

"My wife and I, after 57 years of marriage, have had a great deal of problems over this," Cline says on the recording. "She considers this adultery. I donated my sample. I'm gonna lose my wife. Our marriage will be over. Can you help?"

"There's nothing I can do. I can't stop them from doing anything," Jacoba says in the recorded phone call.

"It sounds to me like you're trying to do harm to me," Cline says on the recording. "I regret what I did but I can't go back and change it. One of my favorite scriptures was Jeremiah 1:5. If you'll remember, it says 'Before I formed you in your mother's womb, I knew you.'"

According to the probable cause affidavit, Cline denied everything telling investigators: "I can emphatically say that at no time did I ever use my own sample for insemination nor was I a donor."

The state did an independent DNA test, which shows a 99.9997-percent probability Cline is Jacoba Ballard's biological father. Prosecutors concluded Cline lied to investigators. He was charged with two counts of obstruction of justice.

"He denied that he was the father when in fact he was," said Marion County Deputy Prosecutor Tim DeLaney. "We think that this sends a clear message that you don't lie when you are confronted with an official investigation."

To get Cline's side of the story, Crime Watch Daily tracked him down at his home. Cline is retired and lives in seclusion in an estate at the end of a long driveway. Cline refused to speak on camera, referring us to his attorney, who had not responded to our request for comment.

Since then, a total of 16 people have come forward claiming Dr. Cline is their father.

Cline has pleaded not guilty to the charges. 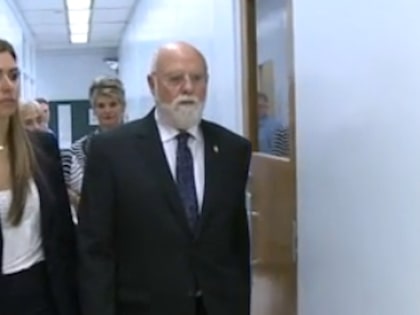 Indianapolis fertility doctor accused of using his own sperm on patients