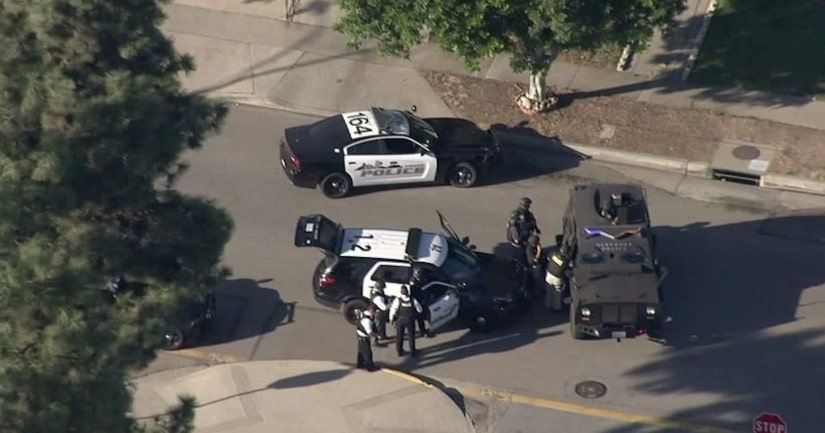 AZUSA, Calif. -- (KTLA) -- Two polling places have been impacted and a middle school is on lockdown in Azusa after a shooting in a residential area left one person dead and three others injured on Tuesday afternoon, officials said.

The incident occurred around 2 p.m. in the area of Memorial Park on West Fourth Street and Orange Avenue, the Azusa Police Department said. Officials originally described the incident as an "active shooter situation," but by 4:40 p.m. law enforcement had contained the situation — although anyone near the area was still urged to shelter in place.

Four people were hit by the gunfire, and one person later died of his or her injuries, according to the Los Angeles County Fire Department. It was unclear whether all those hit were victims or if the injured included the perpetrator.

Three of the patients were transported to area hospitals, including two who were taken by helicopter. Their conditions were not immediately known.

None of the wounded have been identified. Two were female and one was male, and an additional injured body was lodged in a doorway, according to Azusa Police Chief Steve Hunt.

Police were searching for at least one female suspect, and possibly an additional male suspect, Hunt said. He believed the woman was armed with "an assault rifle with rapid-fire capability."

The shooter exchanged gunfire with Azusa Police Department officers, but they were not hit or injured, a fire official told KTLA.

Amid the search for the shooter, multiple police and SWAT vehicle could be seen on the streets of the residential area, which appeared to be near a school, aerial video from Sky5 showed.

Later in the evening, authorities still had not taken anyone into custody in connection with the shooting.

“We have seven tactical teams in the area to make sure that we have the scene secure, we have a perimeter established, and we are working that tactical situation as we speak,” Hunt said.

Although the Dalton location was later re-opened, the Memorial Park polling location remained on lockdown. Those in the area heading to the polls can call 626-812-3233 for information.

"Voters should avoid the area and, if necessary, cast a ballot at an alternate polling location," Logan wrote in a separate tweet.

At least one of the victims had been heading to vote, according to the Los Angeles Times.

Two voters who were inside the Memorial Park North Recreation Center when the shooting occurred spoke to CNN on the condition of anonymity.

One male voter says he was inside when he heard a bunch of shots ring out and people from outside starting to run in before officials locked the doors.

He told the cable news station a "massive shooting is happening and the police have told us to stay indoors. We are currently on locked down."

A female voter told CNN she heard the shots ring out.

"At first, I thought it was construction but people came running into the room saying they see a guy with a bulletproof vest and a white shirt. As of right now, they just have us in the voting room and are trying to keep us calm."

Pictures sent to CNN from inside the polling station show many people inside, including a group of children who were in the building when the shots rang out.