It's a warning all parents should hear: Police say there is a new synthetic drug making the rounds with kids as young as 13. It's called "Pink."

Even though some experts say it's stronger than heroin, it's legal in most states -- and your kids could be buying it right over the internet.

A 13-year-old boy is dead. Less than two days later, his best friend's lifeless body is also found in his own home. Police believe their 15-year-old classmate may be partly to blame. And a community is left mourning.

According to autopsy reports released just days ago, the culprit is a powerful new synthetic opioid called "Pink." Doctors say just touching as little as three grains of the powdery drug can trigger an overdose.

"It's very potent," said Dr. Paula Cook, University of Utah Neuropsychiatric Institute. "It's about seven and a half more potent than morphine."

Crime Watch Daily Salt Lake City affiliate KSTU reports the drug, known as "Pink," or "Pinkie" on the street, got its name because people are sniffing it off their pinky finger. The deadly drug can be ordered on the internet for about 50 cents per capsule.

"It produces euphoria, pain relief, relaxation, and unfortunately it also produces respiratory depression, which means it stops people from breathing and slips them into a coma and death," said Dr. Cook.

In fact, authorities believe the drug, also known as U-47700, could be responsible for at least 50 deaths nationwide, and may have even been a contributing factor in the death of recording artist Prince.

But doctors say it's not just people who can die from Pink: K-9 dogs sniffing out drugs are also at risk. Just a grain or two on a dog's paw could be deadly.

Charges have been filed against a 15-year-old boy in connection with the deaths of Grant Seaver and Ryan Ainsworth.

A search warrant affidavit shows the teenager was purchasing drugs online. One package, delivered from China to a Park City home, had a clear bag containing a white powdery substance. The teen was then seen distributing it to two of his friends. The boy could be tried as an adult, facing one second-degree felony and a Class A.

But making the drug illegal is a challenge for law enforcement since drug-makers can tweak the formula. Changing as little as one molecule can make the substance legal again.

"The DEA is trying to put it on their emergency list to make it illegal, but it's in the process of being discussed," said Utah State Representative Paul Ray (R-Davis County).

With the use of synthetic opioids at an all-time high, some doctors are urging people to store a pure antidote in their medicine cabinets called Naloxone. It can reverse an overdose.

For now, police are scrambling to find more information about the dangerous drug, with hopes of stopping the scourge before another parent's child is lost. 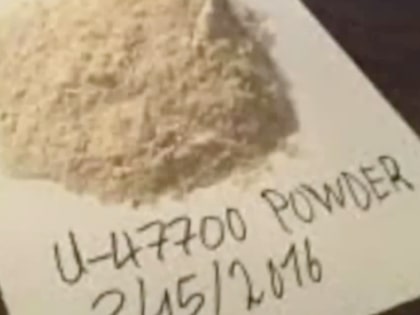