A real estate agent living what appeared to be the perfect life -- until police put her in handcuffs and accused her of murder.

Carolyn Heckert is the realtor you could call for a killer deal in Smithville, Missouri. But police claim the sweet-looking 48-year-old mother of two truly could be a vindictive killer. Heckert is now charged with the stabbing murder 18-year-old Sarah DeLeon.

Sarah's sister Rachel Kennard has been waiting 27 torturous years for police to make an arrest. Everyone in Sarah's family suspected Heckert early on.

Sarah DeLeon's was stabbed mercilessly and dumped along railroad tracks.

For nearly three decades Sarah's murder has been a daunting unsolved mystery.

Kansas City police now say Sarah did have at least one enemy: Carolyn Heckert. Sarah was dating Carolyn's ex-boyfriend, and Sarah's family believes her murder was a revenge killing.

Why did it take so long to arrest Heckert? With advancements in technology, authorities are reportedly able to put Heckert's DNA at the scene of the crime.

But that's not all.

The realtor is now also being linked to a second unsolved murder with that same new DNA technology. This one happened in 1994, five years after Sarah's murder, just across the state line, 13 miles away, in Independence, Missouri. Another savage attack on a young woman -- this time it was a doting mother of two, Diana Ault.

A vicious killer ambushed her in her kitchen and shot her point-blank. There were no suspects and no clues.

DNA technology allowed cops and forensic analysts to take a new look at each case.

DNA not only linked the murders of Ault and DeLeon, but there is another thread that ties the two together. Police say Carolyn Heckert was at one time having an affair with Diana Ault's husband.

Police claim the realtor has been linked to Ault's case, but they have not charged her in the murder.

For now, Heckert is being held on $1 million bond. She's been charged with murder and has not yet pleaded. 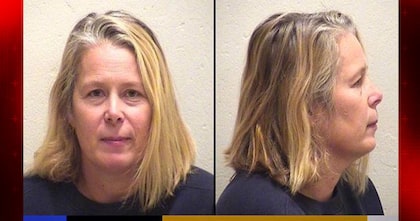