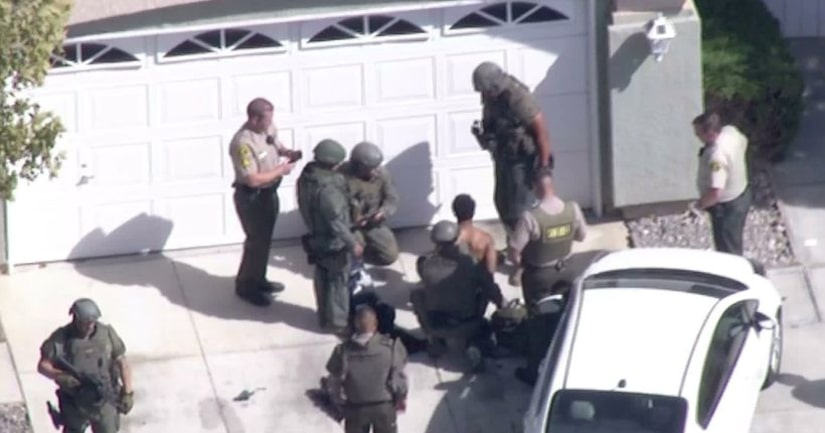 LOS ANGELES -- (KTLA) -- A sheriff's sergeant has died after being shot and a suspect was taken into custody after a search for the shooter in Lancaster near Antelope Valley College, which issued a shelter-in-place order Wednesday afternoon.

In an afternoon news conference, authorities announced that Sgt. Steve Owen had died at the hospital.

The shooting occurred at 12:35 p.m. in the 3200 block of West Avenue J-7, according to Deputy Mike Barraza with the Los Angeles County Sheriff's Department's Lancaster Station.

The area is a couple blocks north of the Antelope Valley College campus, and a SWAT team and dozens of deputies could be seen responding to a residential area there.

Preliminary information indicated a deputy was struck by gunfire and taken to a hospital in unknown condition, Barraza said.

He later said a sergeant and a deputy were both shot. That information was later corrected, with sheriff's spokeswoman Nicole Nishida saying only a sergeant was shot.

Aerial video just after 2 p.m. showed a man coming out of the back door of a home and lying down on the pavement in the backyard, next to a pool. Apparently in response to deputies' commands, he walked to the side of the home and taken into custody at the front of the home's garage without incident, Sky5 video showed.

Nishida confirmed about 2:15 p.m. that one person was in custody and no suspects were outstanding.

Owen's wife, a sheriff's arson/explosives detective, was able to get the hospital before Owen died, officials said.

The sergeant was shot in the face, Lancaster's mayor told the Los Angeles Times, which reported the sergeant and a deputy were responding to a burglary call.

The circumstances that led to the shooting are not known.

Barraza said there was a call for service that prompted authorities' response, but he didn't know what the call was about.

Students at Antelope Valley College took to Twitter to report hearing gunshots in the noon hour.

Just after 1 p.m., the college warned people on campus to shelter in place or avoid the area due to an "armed suspect in vicinity."

FULL STORY: Sheriff's sergeant dies after being shot in Lancaster; 1 in custody - KTLA