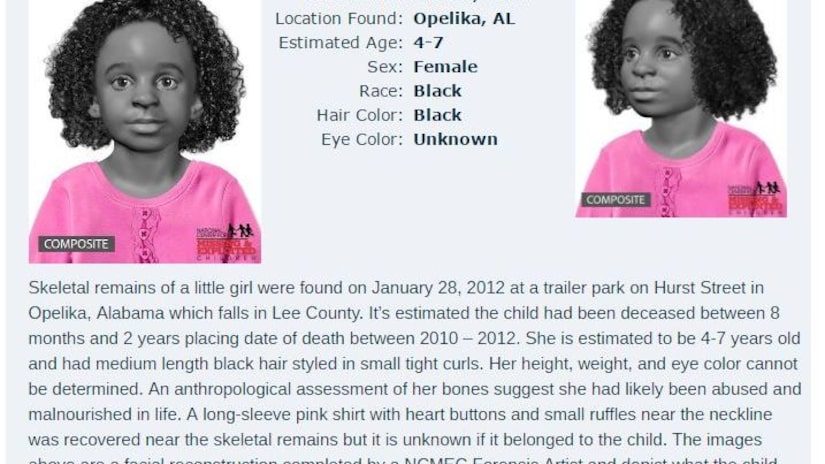 OPELIKA, Ala. -- (WBRC) -- Opelika Police continue to pursue leads in the “Jane Doe” case first reported in January of 2012.

New composite photographs of Jane Doe were recently released in conjunction with the National Center for Missing and Exploited Children and the Lee County Coroner's Office.

The composites were released in hopes of someone possibly recognizing her and assisting in being able to identify her.

Through that process several tips were received, one of which was very promising and lead to us obtaining several photographs.

It is believed the young girl in these photographs is Jane Doe, however, officials are not positive who she is.

The photographs were taken during a Vacation Bible School at Greater Peace Church in 2011. All attempts to identify her through church and school records have failed.

Police officials are asking for the public's help in identifying who this young girl is. She would have been about 4-5 years old in these pictures in 2011.

It is believed she had a slightly unkempt appearance and was not very clean. She was quiet and stayed to herself, not interacting with other children very much. She had trouble communicating on the same level as the other children.

Anyone who recognizes this young girl is asked to contact the Opelika Police Department Investigative Services Division at (334)705-5220, the Secret Witness Hotline at (334)745-8665, or the National Center for Missing and Exploited Children's Call Center at 1-800-THE-LOST(843-5678).