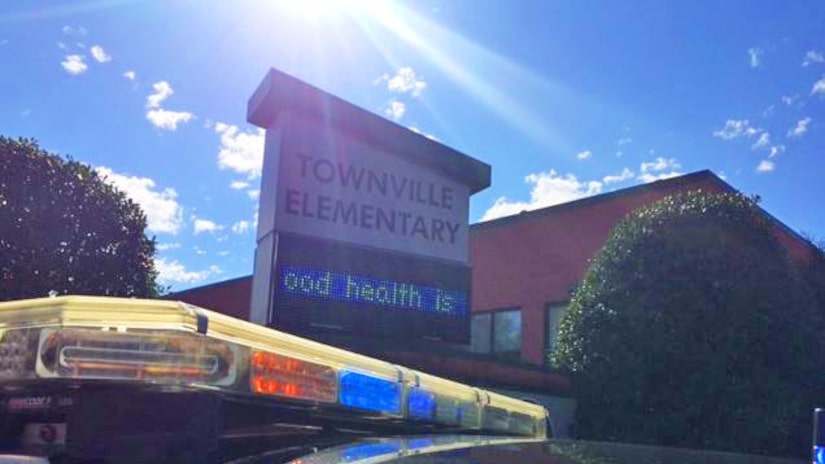 TOWNVILLE, S.C. -- (WMBF) -- One man is dead and two students and a teacher are recovering after two shooting incidents in Anderson County, authorities say.

At a 5 p.m. press briefing, Anderson County authorities said they believe a teenage male who was taken into custody following a shooting at a South Carolina elementary school first fatally shot his father.

Deputies have since said the suspect is 14 years old. His name has not been released.

Coroner Greg Shore identified the victim who was found shot to death at a home approximately two miles from the school as 47-year-old Jeffrey Osborne. He said 911 dispatchers received a call from the victim's family shortly after the shooting incident at the school.

Anderson County Sheriff's Capt. Garland Major said Osborne is the father of the teen accused in the shooting. He says authorities think the teen first shot Osborne before going to the school and opening fire.

Deputies said the shooter used a handgun and that one of the students was shot in the leg and the other in the foot. He said a female teacher was shot in the shoulder during Wednesday's shooting at Townville Elementary School.

One student was airlifted to the Greenville Hospital System pediatric trauma unit. The second student and the teacher were taken to AnMed Health System, WHNS reported. MedShore Ambulance Service said the child taken to Greenville was in serious condition and the two patients at AnMed were in stable condition as of 4:30 p.m. Both the student and teacher who were taken to AnMed had been released by 6 p.m., WHNS reported.

The students are both six years of age and are black males, the teacher is a white female and the gunman is a white male. Garland ruled out any racial undertones and said no terrorism is involved.

"This is going to be a very slow, methodical and meticulous investigation," Garland said. "We're not going to have all the answers at one time."

A teacher called 911 from a classroom at 1:45 p.m. to report an armed male was shooting inside the school and that a student had been wounded, Anderson County Emergency Services Director Taylor Jones said.

Deputies said they arrived on the scene within seven minutes and that the suspect was in custody before 2 p.m.

A volunteer firefighter from the community who was among the first on scene and apprehended the 14-year-old suspect in two shooting incidents that left one man dead and three others wounded. Jamie Brock, a Townville volunteer firefighter, engaged the suspect and "took him down," Jones said.

Authorities say the shooting occurred in the playground and that the suspect never made it inside the school building.

Deputies said they believed the gunman acted alone and there was no further threat to the community.

"We are heartbroken by this senseless act of violence but are so thankful for the quick response from law enforcement and staff," Anderson County District 4 Superintendent Dr. Joanne Avery said. Avery said classes for the rest of the week have been canceled.