Steve Talley used to be a buttoned-down financial advisor. Until one day, in a shocking turn, everything spun out of control.

In a story Crime Watch Daily first brought you, Talley was arrested for not one but two bank robberies.

One night, long after Talley went to bed, the FBI and a Denver Police SWAT team bust into his house and book him.

Cops said they had the evidence. They said it's him in surveillance video taken during both robberies.

Talley couldn't make bail and was held for two months in jail. He ended up losing his job and his home.

But Talley had an airtight alibi for the first hold-up: a time-stamped audio recording of a call he made at work.

And a mole on Steve Talley's cheek isn't on the robber's face in surveillance video.

Plus there are some other things that didn't match.

Those scars would become a piece of the key that would unlock Talley's cell door.

The bank teller tells Crime Watch Daily Denver affiliate KDVR she noticed strange markings on the suspect's hands -- but not on Talley's.

"He was an innocent man. He didn't do it," said bank teller Bonita Shipp.

And prosecutors ultimately agreed. After reviewing the evidence, they dropped the case.

But Steve Talley says his life has been ruined. He's been homeless ever since he got out of jail.

Now Talley's taking his life back. He's just filed a federal lawsuit against the FBI and the Denver Police Department for $10 million, claiming false arrest and excessive force.

The suit says cops "hit his body repeatedly with fists, batons and the butt of their guns."

So far, no comment from either the FBI or the Denver P.D. Crime Watch Daily will continue to follow the case. 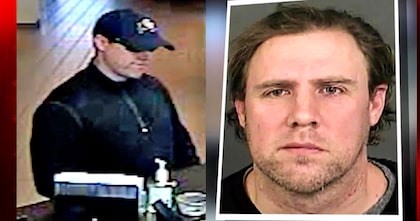