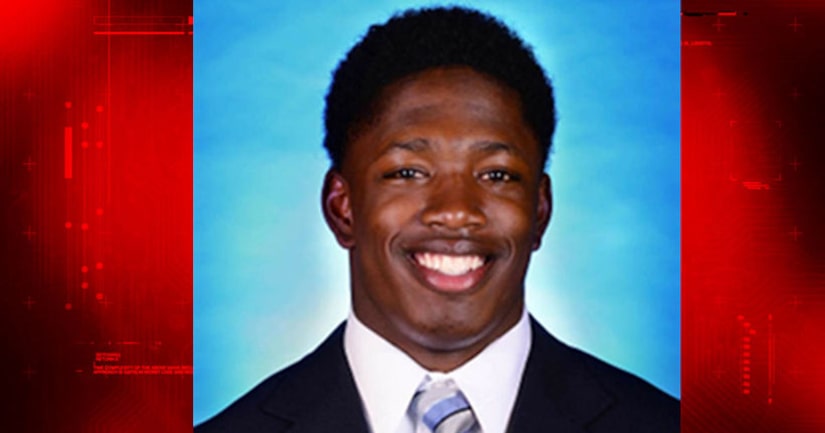 CHAPEL HILL, N.C. -- (WGHP) -- University of North Carolina linebacker Allen Artis turned himself in Wednesday on misdemeanor charges of sexual battery and assault on a female.

A University of North Carolina at Chapel Hill student went public about her alleged rape on campus by a football player in a press conference Tuesday afternoon, claiming prosecutors and the university have been slow to bring justice.

Delaney Robinson, a sophomore at the university, told reporters in Raleigh she was assaulted on February 14, and that she has tried for months to have formal charges filed.

In North Carolina, anyone can go before a magistrate and swear to criminal acts that happened against them and the magistrate determines if there is enough evidence to go forward. Warrants issued this way can only be at the misdemeanor level; felonies must be brought by the DA's office, based on beyond a reasonable doubt standard.

The Orange County District Attorney's office told CNN that the UNC Chapel Hill police investigation has not been completed and there has been no decision on whether to bring felony charges.

"The investigation is still ongoing," District Attorney Jim Woodall said. "These are very serious charges and before we go forward we would like to have the investigation completed or close to being completed."

He said for stronger charges to be brought against a suspect, prosecutors look for proof beyond a reasonable doubt.

Typically, CNN does not name alleged victims of sexual assault. But in this case, Robinson has come out publicly.

CNN was unable to reach the football player or determine whether he has an attorney.

Robinson said she was 18 years old at the time of the alleged assault at the Ram Village apartments on UNC's campus. She is now 19.

"Yes, I was drinking that night on Valentine's Day," Robinson said, with her father and lawyer by her side. "I'm underage, and I take responsibility for that. But that doesn't give anyone the right to violate me. I did not deserve to be raped. My life has changed forever, while the person who assaulted me remains as a student and a football player on this campus."

Robinson said following the incident she went to the hospital and gave an account of what she could remember to the sexual assault nurse. She was then questioned by the university's department of public safety investigators, who she said asked "demeaning and accusatory questions."

"Did I lead him on? Have I hooked up with him before? Do I often have one-night stands? Did I even say no? What is my sexual history? How many men have I slept with? I was treated like a suspect," she said.

An incident report from the UNC Department of Public Safety was taken at just before 5:30 a.m. on Valentine's Day, according to the document obtained by CNN.

Robinson said her "humiliation turned to rage when I (later) listened to the recorded interviews of my rapist by DPS investigators."

"Rather than accusing him of anything, the investigators spoke to him with a tone of camaraderie. They provided reassurances to him when he became upset. They even laughed with him when he told them how many girls' phone numbers he had managed to get on the same night that he raped me. They told him, 'don't sweat it, just keep on living your life and keep on playing football,'" Robinson said.

Robinson's lawyer, Denise W. Branch, said her client had cooperated fully with the investigation by the department of public safety and the university's Title lX office.

Title IX is the law that prohibits discrimination on the basis of sex at any educational institution that receives federal funding.

"Delaney made the courageous decision to come forward," Branch said in a statement earlier. "But that courage was met with inaction and indifference. Delaney feels betrayed by the University she chose."

UNC said it was aware of the allegations but could not address them because of federal privacy law.

"The University of North Carolina at Chapel Hill is deeply committed to the safety and well-being of our students and takes all allegations about sexual violence or sexual misconduct extremely seriously," it said.

UNC football coach Larry Fedora said he could not comment on the allegations.

"We take these matters very seriously and are fully cooperating with the appropriate authorities," he said.

The football player has been suspended from the team, per policy, WTVD reports.

The football player will not have to file a plea but will now be served and have to appear in court for a bond to be set, according to Woodall. This has not happened yet.

"There is no question that there was physical contact but what the circumstances are surrounding the contact are what investigators are trying to determine," he said.