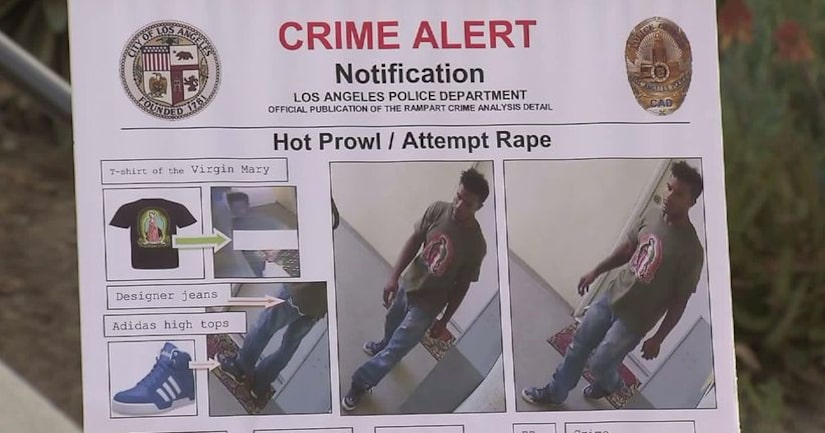 LOS ANGELES -- (KTLA) -- A $35,000 reward was announced Tuesday after a series of eight hot-prowl attacks, including two attempted rapes, in which a man armed with a kitchen knife targeted mostly women who were alone in apartment buildings in the central Los Angeles area.

The incidents began Aug. 1, with four attacks in the Los Angeles Police Department's Rampart Division area on the same day. The most recent was Saturday, police Lt. Joe Losorelli said.

“This suspect, we believe, has the potential to carry out a more serious crime. He's very bold to enter locations and attack the people that are inside,” Losorelli said at a news conference where the reward was announced.

“There is a violent predator on the loose,” O'Farrell said.

The councilman and police called for the public's help in the case, saying the attacker has not been found despite a round-the-clock investigation and wide distribution of his image from surveillance video in an Aug. 1 attack.

In that incident, a man entered an apartment complex in the 800 block of North Mariposa Avenue in East Hollywood, going into a woman's apartment that had been left unlocked while she went to the laundry room.

When she returned, just before 12:30 p.m., he covered her mouth with his hand and pushed her against the wall, knocking her to the floor. She screamed and he fled.

Then, about 1 1/2 hours later, the man entered another apartment complex in the 1600 block of Cortez Street in Echo Park while the victim was inside.

He told the woman, “You're pretty; I want to make you mine,” according to LAPD.

He put his hands inside her shirt and pinned her against the couch, but the victim's dogs tried to bite him, giving her time to push him out of the apartment.

Video shows the same man attacked in both incidents, according to LAPD. He is described as a light-skinned black man with brown eyes, 5 feet 10 inches to 6 feet tall, 170 to 190 pounds, and 20 to 25 years old, Losorelli said.

He is also suspected in a series of burglaries that have largely targeted women. Few details were offered about those incidents, but Losorelli said two additional crimes occurred Aug. 1, three on Aug. 2 and one on Saturday.

An LAPD news release said the crimes occurred in downtown and Silver Lake/Sunset areas, in addition to Echo Park and East Hollywood.

In all eight cases, the attacker was wearing a green T-shirt with an image of the Virgin Mary on it, blue jeans, and blue sneakers with stripes, Losorelli said.

And in all of the crimes, the man trespassed onto an apartment complex property and checked individual apartment doors until finding one unlocked, the lieutenant said.

He bore a large kitchen knife that was visible to his victims but not used, Losorelli said.