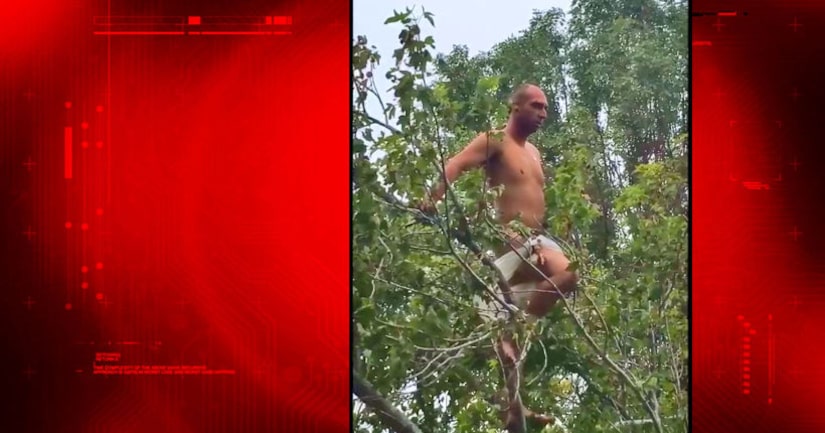 OXNARD, Calif. -- (KTLA) -- A naked Oxnard man was arrested near a Boys & Girls Club on Saturday after allegedly threatening officers from a tree and spitting blood while under the influence of drugs, according to police.

Oxnard officers arrived on the scene around 7:15 a.m. after receiving a call about a nude man near the Boys & Girls Club in the 1900 block of West Fifth Street. There, they found 30-year-old Jose Luis Garcia behaving erratically, according to Sgt. Bakari Myers in a press release.

Garcia allegedly began threatening officers and throwing rocks before climbing a tree in a nearby park, police said. He can be seen screaming in the tree in a video posted to the Oxnard Police Department's Facebook page.

Officers spent several minutes trying to talk Garcia down so they could safely take him into custody. He admitted to using cocaine and meth prior to police approaching him, according to the release.

After several minutes of negotiating, Garcia was arrested after falling out of the tree, police said. While being taken into custody, Garcia allegedly spat blood into the face of one of the officers after biting the inside of his mouth.

Officers were able to identify Garcia based on tattoos on his body. A record check revealed he had two misdemeanor warrants and was on probation for driving under the influence of drugs, battery against a peace officer and resisting a peace officer with threats or violence.

Garcia was transported to a local hospital and released. He was booked for outstanding warrants, battery on a peace officer and being under the influence of drugs.