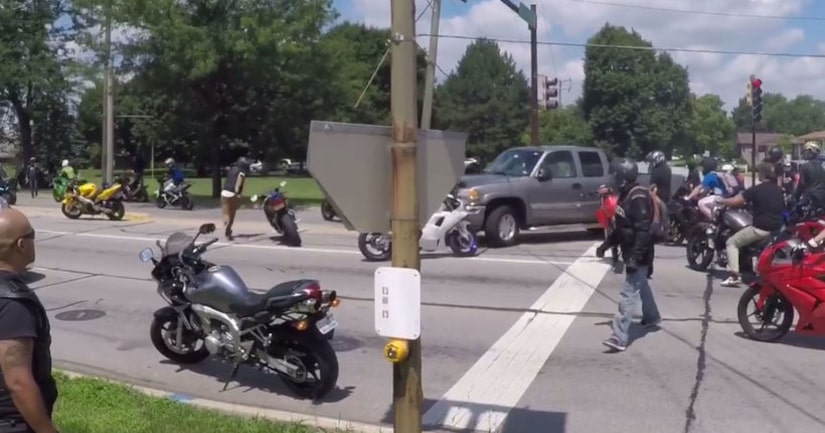 AURORA, Ill. -- (KOLD) -- A frightening scene unfolded in front of cameras in the Chicago suburb of Aurora, Illinois Sunday. Videos taken by bikers show a pickup truck ramming motorcycles and plowing through a group of bikers. And it all happened at a church.

Chicago United Riders were hosting the ride captured much of the encounter on video. It shows the truck swerving into the group of bikers, then stopping in front of them at a green light.

Another video shot by a custom bike show owner shows motorcyclists surrounding the truck. It doesn't show what happened just before one of the bikers starts trying to smash the pickup driver's side window with his helmet. But Dale Kiesgen, who posted the video to Facebook, commented on what sparked the violent encounter. He also writes that the truck driver forced his vehicle into the pack of bikers who were riding in the group. In a group rider, bikers try to stay tightly packed for safety, so other vehicles don't get in between, breaking them apart.

Kiesgen wrote that the driver's actions upset the bikers and the confrontation ensued. In his video you see the truck back up into motorcycles then take off, driving right over a white sports bike. In the video you can hear the bike crunching against the pavement. Then the truck barrels through the crowd, bikers running to escape. The truck then speeds through the lawn of St. Mark's Lutheran Church, doing a half doughnut in the grass as the bikers continue to scatter.

Another video shows another angle and the bikers surrounding the truck, hitting it with a helmet.

The truck then drives through the biker group again, but this time doesn't hit anything. Many of the bikers then take off chasing the truck. Kiesgen posted that no one was seriously hurt and that the driver of the pickup has been arrested. I have a call into the Aurora Police Department but have not heard back.

Another video posted to Facebook shows the riders before the incident. It's a very large group of bikes taking up all lanes of traffic. In the video you can see riders passing cars on the shoulder and passing one another in the opposing lanes.

A newer video includes reaction from police officers. They appear to be taking the side of the truck driver.