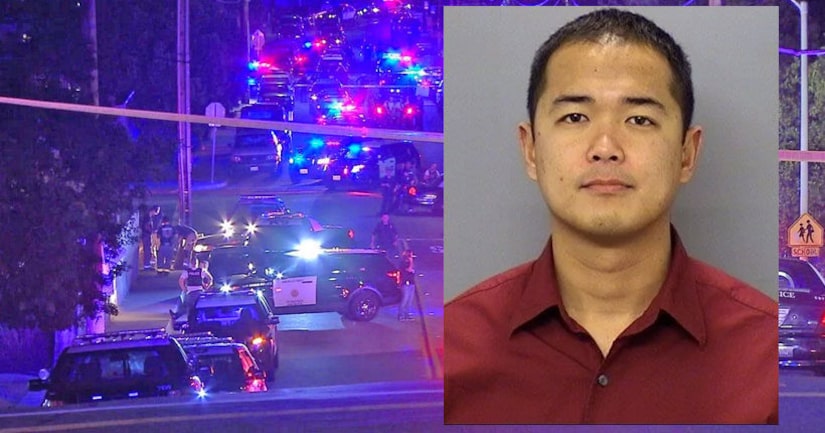 SAN DIEGO -- (KTLA) -- A veteran San Diego police officer was killed and another was injured Thursday night in a shooting as the pair tried to make a stop, leading to one suspect's arrest and an extensive hunt for anyone else who might have been involved, police said.

The detained suspect was shot and was in critical condition at a hospital Friday morning, police said.

Jonathan "J.D." DeGuzman, 16-year veteran of the department, was killed. Officer Wade Irwin, a nine-year veteran, was shot and hospitalized.

Zimmerman commended the "professionalism and courage" of her sworn and civilian staff in the overnight investigation, which was continuing Friday.

The shooting happened after the two uniformed gang-suppression officers tried to stop an individual in the 3700 block of Acacia Grove Way, in the city's Southcrest section, Zimmerman said.

It wasn't clear if the confrontation started as a vehicle or pedestrian stop, the chief said at an 11 a.m. news conference, clarifying earlier comments.

The two officers radioed shortly before 11 p.m. that they were going to stop someone, Zimmerman said earlier Friday. Almost immediately afterward, they called for emergency backup, Zimmerman said.

"It happened extremely quickly," she said.

She didn't say why the officers were trying to make a stop. Asked whether the shooting was an ambush, the chief said it wasn't clear.

"We don't have that answer at this point," she said.

Irwin, who was shot in the upper torso, was not yet awake following surgery and has not been interviewed, she said.

The suspect was taken into custody in a ravine-type area not far from the shooting, Zimmerman said. She described him only as a Hispanic adult male.

Police were still searching for any possible additional suspects.

Zimmerman said a "potential second suspect" may be in a house that was surrounded by police not far from the site of the shooting, in of 4000 block of Epsilon Street in the Shelltown neighborhood.

Smoke or gas bombs were fired into the home, the Los Angeles Times reported, and video showed SWAT officers on scene.

A man named Marcos was urged to come out come out of the house by an officer on a bullhorn, the Times reported. The windows of the home were smashed, KTLA sister station KSWB in San Diego reported.

Shortly before 1 p.m., police took the man into custody at nearby 42nd and Delta streets, and no one was at the home, KSWB reported.

Zimmerman said officers who responded to the pair's call for help made a heroic attempt to save the life of their colleague, rushing him to a hospital in a squad vehicle.

DeGuzman had a wife and two young children, Zimmerman said.

Irwin is also married; he and his wife have a 19-month-old child, the chief said. He is in serious condition, Zimmerman said at the late morning news conference.

Officers were wearing body cameras and there is video evidence, the chief said.