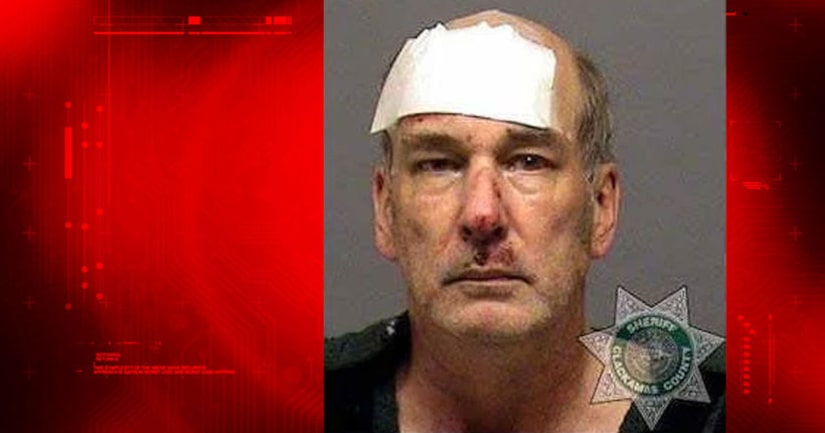 CLACKAMAS COUNTY, Ore. -- (KCPQ) -- A man who was found with his hands tied and a bag over his head on Interstate 205 was later arrested as police said it was all part of a staged kidnapping plot to get money from the man's mother, according to KPTV.

Police and emergency crews responded to northbound I-205 near Johnson Creek Boulevard at 10 a.m. Sunday.

Witnesses called 911 to report a man had fallen out of a silver Dodge Neon.

John Robert McPhail, 57, of Camas, was found suffering from minor injuries with his hands bound behind his back. He was taken to the hospital for treatment.

Police said McPhail claimed he had been kidnapped. Multiple police agencies began to investigate in fear there may have been additional victims.

Witnesses told investigators the car McPhail fell from stopped and two men got out and approached him. However, as witnesses stopped at the scene, they said the two men got back in the car and drove away.

One witness attempted to flatten a tire on the car before it got away.

Further conversations with McPhail caused investigators to become suspicious due to “gross inconsistencies,” according to Oregon State Police.

The Camas Police Department reported that McPhail confessed that the kidnapping was staged to try and get money from his mother. Investigators said the plan failed and McPhail's mother did not lose any money.

McPhail was arrested and booked into the Clackamas County Jail on charges of first-degree conspiracy to commit theft and initiating a false report. A no complaint order was issued on the charges Monday, meaning they have been dropped for the time being as the investigation continues.

Police are asking for help tracking down the other two men who were in the car with McPhail. Oregon State Police identified them as Justin Gibson, 36, and Joseph Gibson, 33, both of Camas. They were last seen driving a 2000 Neon with Washington license plates AYW4837.

FULL STORY: Police: Man fakes kidnapping in plot to get money from his mother - KCPQ