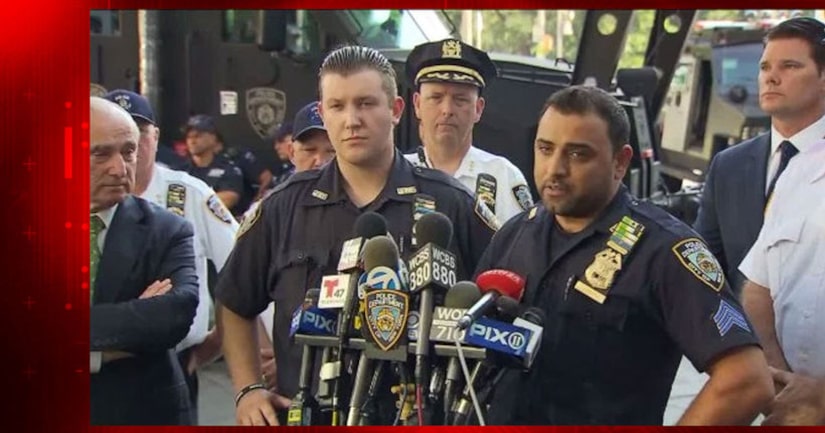 MANHATTAN -- (WPIX) -- Two cops on patrol in busy Times Square raced to get the public out of harm's way Wednesday night after someone threw a suspected bomb into their van, sources said.

The NYPD bomb squad later gave the device an all-clear and no one was harmed in the incident, officials said.

Sgt. Hameed Armani and Officer Peter Cybulski, both assigned to Times Square Unit, were parked on Broadway at Duffy Square around 11:30 p.m. on Wednesday when a person inside a dark-colored SUV tossed a device on the van's dashboard, according to sources.

After the officers saw the device start to "flash" and make "clicking" sounds, the officers made the decision to drive away from Times Square as quickly as possible to an area where there would be less pedestrian and vehicle traffic, Armani said in a press conference Thursday morning.

"I look around, saw a lot of kids, a lot of young people," said Armani, a 10-year NYPD veteran and father to a young daughter. "We both look at each other and I go, 'We're going to go, but I'm not going to have anyone else go with us.'"

Armani drove their van, sirens flashing, eastbound to 46th Street and Sixth Avenue, the officer said. The two officers spent the drive saying their prayers with the intention of getting the device out of harms way, Armani said.

Once they stopped, Cybulski proceeded to pick it up and hand it to Armani who took it from the van and put it on the sidewalk away from the public and buildings.

When both NYPD members were a safe distance away, they requested bomb squad.

Streets were temporarily closed off nearby but eventually the bomb squad gave an "all-clear"and determined the object was inert. Sources said the device appears to be a wax candle, a battery operated lantern, tin foil and a white piece of clothing.

Commissioner William Bratton said to reporters Thursday that he was "extraordinarily proud" of the actions of the two officers, who he lauded as "heroes."

"(Their) performance last night was exemplary both in terms of their professionalism and their bravery," Bratton said. "They put their own lives at risk so that they could save potentially hundreds, if not thousands, of people in Times Square."

The man suspected of throwing the device at the patrol van was later spotted at Columbus Circle, where police engaged in a six-hour standoff Thursday, according to police.

Officers arrested 52-year-old Hector Meneses of Queens around 8 a.m. after he barricaded himself in his vehicle and negotiated with police for several hours. Police closed off the area around Columbus Circle for hours, disrupting traffic and public transit throughout Manhattan.