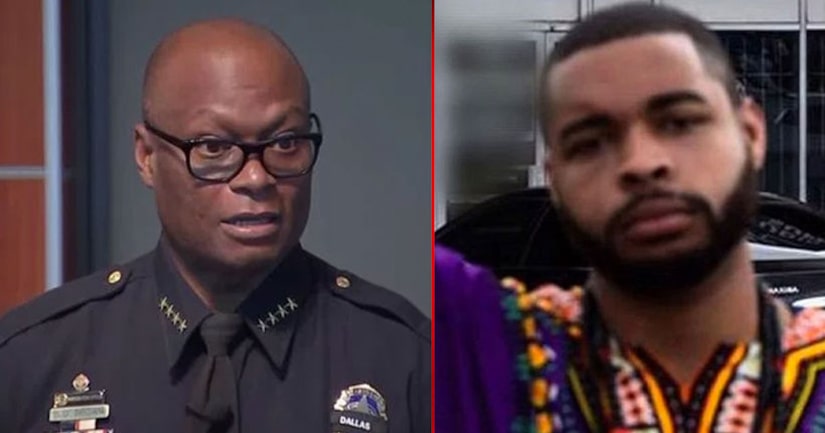 "We're convinced that this suspect had other plans and thought that what he was doing was righteous and believed that he was going to target law enforcement -- make us pay for what he sees as law enforcement's efforts to punish people of color," Brown said.

Brown said police found bomb-making materials and a journal at the shooter's home that suggested he'd been practicing detonations and appeared ready to take aim at larger targets.

It was enough, Brown said, to have "devastating effects on our city."

He said the shooter, Micah Johnson, "obviously had some delusion. There was quite a bit of rambling in the journal that's hard to decipher."

Among Dallas investigators' current goals: Figure out what Johnson had meant by "RB," lettering that Brown said he'd written on the wall in blood before his death.

Police are "trying to figure out what those initials mean, but we haven't determined that yet," Brown said.

"At the scene where he was killed, he wrote some lettering in blood on the walls, which leads us to believe he was wounded on the way up the stairwell, on the second floor of the El Centro building and where we detonated the device to end the standoff there was more lettering written in his own blood," he said.

The details made for significant new disclosures about the killings that have rocked the Dallas community and the nation. Brown also sought to deliver a message to protesters in states like Minnesota and Louisiana after people there were killed by police last week in what critics have called cases of excess force.

"We're sworn to protect you and your right to protest, and we'll give our lives for it," Brown said.

Brown said the gunman was only willing to negotiate with a black police officer during the standoff.

He was also singing while speaking with police officers, Brown said.

"We had negotiated with him for about two hours, and he just basically lied to us -- playing games, laughing at us, singing, asking how many (police officers) did he get and that he wanted to kill some more and that there were bombs there," Brown said, "so there was no progress on the negotiation."

"I began to feel that it was only at a split second he would charge us and take out many more before we could kill him," he said.

That, Brown said, is when his officers devised a plan to use a robot to detonate a bomb near the gunman.

Brown said he faced a difficult choice -- with no way to send officers after the gunman without further jeopardizing their lives.

"He was secreted behind a brick corner," he said, "and the only way to get a sniper shot to end his trying to kill us would be to expose officers to grave danger."

When his officers proposed using the robot, Brown said, "I approved it. And I'll do it again if presented with the same circumstances."

"You have to trust the people whose lives are at stake. I appreciate critics, but they're not on the ground, and their lives are not at risk," he said.

Brown also said police arrested 20 to 30 people who had been involved in protests in Dallas that night who were wearing gas masks and bullet-proof vests and had AR-15s slung across their shoulders. That's legal in Texas, he said, but once the shooting began, those people "were suspects."

He also encouraged Americans to "stand up" to support police officers.