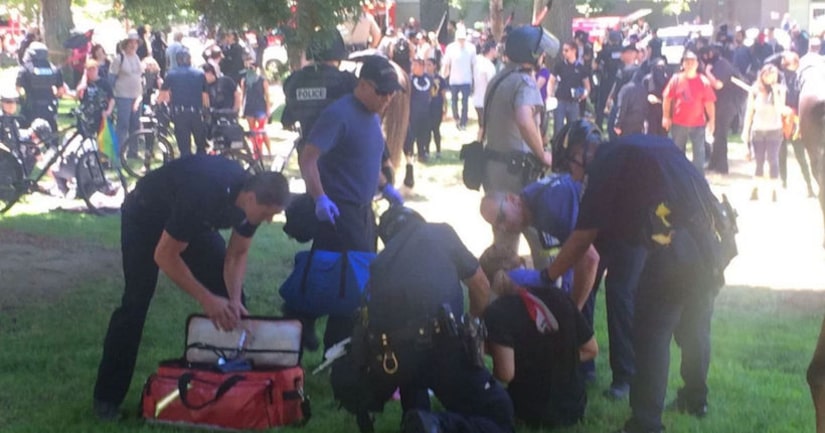 KRON reports via AP at least 10 people were stabbed Sunday when counter-protesters clashed with members of right-wing extremists groups that planned to hold a rally outside the California state Capitol building in Sacramento, authorities said.

California Highway Patrol Officer George Granada said about 30 members of the Traditionalist Worker Party were gathering for a rally around noon Sunday when they were met by about 400 counter-protesters and a fight broke out, KRON reports.

Ten people were injured in the clash, including nine men and one woman, KTXL earlier reported. At least two people are in critical condition. Eight of the injured are at UC Davis Medical Center. The condition of the patients ranges from good to critical. It was not immediately clear which group the victims belonged to.

No arrests were immediately made.

Streets around the Capitol were shut down for several hours. The Capitol Building itself remained on lockdown after the protesters left. Those inside the Capitol at the time of the attack — both tourists and employees — were told to stay inside the building, many took shelter in the basement.

The Capitol usually closes at 5 p.m., but CHP officers say the door will likely remained locked for the rest of the day.

Sacramento Police confirmed a gun was found on Capitol grounds after protesters cleared out.