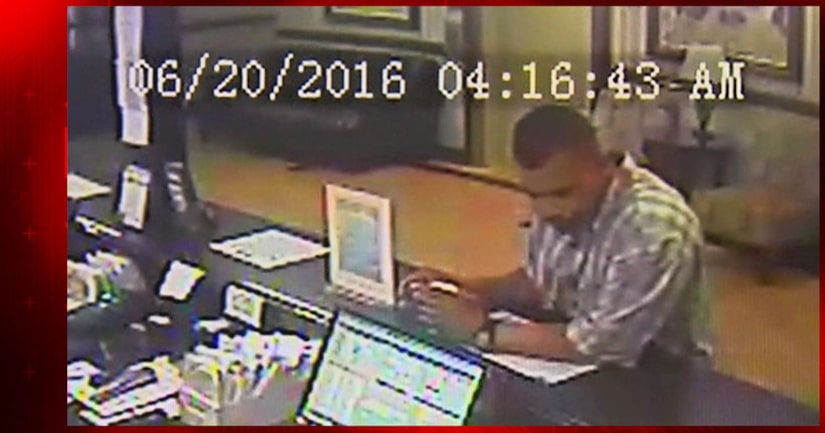 The victim works as a flight attendant for Air Georgian. She had a layover Sunday night into Monday morning at Detroit Metro Airport. She went with co-workers to the Wheat and Rye Restaurant near the airport. Police are investigating whether her rapist spotted her there.

The woman left the restaurant in a taxi with co-workers and they were taken to the Days Inn Hotel across from the airport.

Police say the suspect arrived around the same time driving a separate vehicle. The suspect loitered in and around the hotel prior to disappearing from surveillance camera view. Police say he somehow got into his victim's room and raped her.

He can be seen on surveillance video going through documents on the lobby desk at the Days Inn.

There was no hotel employee at the desk at the time. It isn't clear if he was gathering information that allowed him to find his victim. 7 Action News has reached out to the Days Inn for comment. Their parent company, Wyndham Worldwide, responded with the following statement:

"These allegations are deeply troubling as the safety of hotel guests and staff is of great importance to us. While we do not own or operate this hotel, we're unable to comment further at this time due to the matter being under investigation."

Police are asking the public to be vigilant and report any suspicious men who appear similar to the suspected rapist. If you have any information that could help this investigation call Romulus Police at (734) 941-8400.