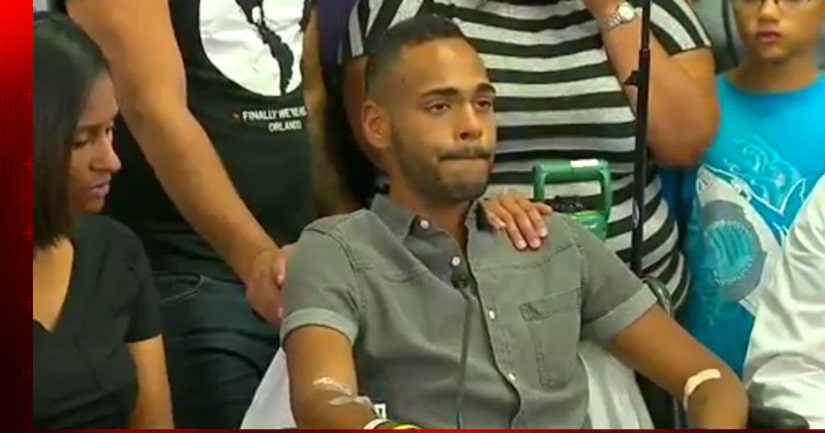 49 killed, more than 50 injured in shooting at Pulse nightclub

ORLANDO, Fla. -- (WKMG) -- A man who was shot inside an Orlando nightclub pretended to be dead but thought, "I'm next, I'm dead" before the gunman twice shot at his head but struck his hand and hip instead.

Angel Colon, one of 53 injured in the mass shooting at Pulse nightclub, shared his story Tuesday morning at Orlando Regional Medical Center. Forty-nine victims were killed in the shooting.

Appearing in a wheelchair with the doctors and nurses who treated him nearby, Colon, 26, talked about what happened inside the nightclub.

Colon said he spent the night at the club and was saying good-bye to his friends when things changed.

"It was a great night -- smiles and laughter,” said Colon, who added that he then started hearing gunshots.

“I was shot three times in my leg (as I was running away) and had fallen down,” Colon said. "I got trampled over. All I could do is just lay there as people ran over me."

Colon said the gunman then went into another room, and he heard more gunshots.

“I felt a little safe … but I hear him come back. He's shooting everyone on the floor to make sure they're dead," Colon said. "He shoots the girl next to me. 'I'm next, I'm dead,' (I thought) and he shoots toward my head and hits my hand. (He) shoots again and hits my hip. I just laid there so he wouldn't know I was alive.”

Colon said the shooter then went to the front of the club.

"I think that's where he battled the cops (and was killed)," Colon said.

Colon, whose leg was broken in the shooting, said a police officer had to drag him across shattered glass, across the street an to a nearby restaurant before he was taken by ambulance to ORMC.

Colon teared up as he thanked the hospital staff for taking care of him and the other victims.

“This hospital is amazing," Colon said. “I will love you guys, forever."

Doctors said patients were arriving by "truckloads" and "ambulance-loads" at the hospital.

"This was the largest disaster that we probably could have imagined," Dr. Michael Cheatham said.

A doctor said he wound not be surprised if the death toll rises.