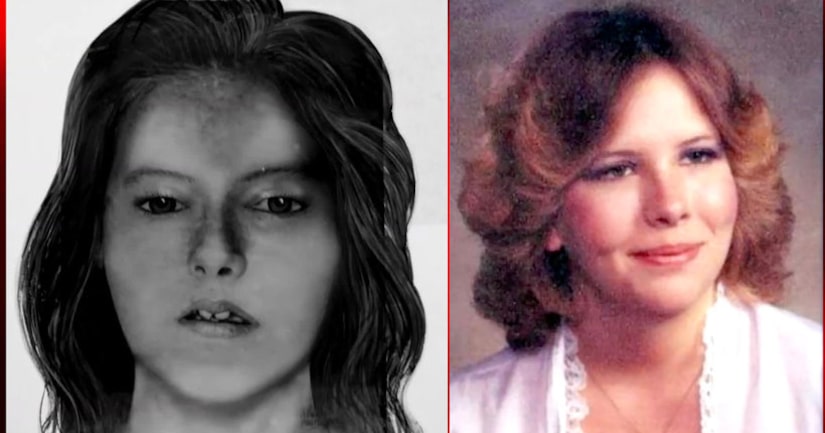 On a lonely stretch of highway in Amarillo, Texas, police make a grisly discovery on the side of the road in October 1983.

A 14-year-old boy out on a bike ride stumbled across the body of the dead girl.

"He looked and found the body of a female in the culvert," said Holmes. "When we arrived that's when we decided we had a homicide on our hands."

Investigators say the girl was strangled from behind, dragged 30 feet down the asphalt road and left for dead.

"She was missing her shoes and her blouse and had probably been there 24 to 30 hours," said Holmes.

Amarillo Police Lt. Gary Trupe says it was without question a cold-blooded murder. But to catch her killer they first had to figure out who she was.

"They ran fingerprints both through FBI and they ran them through the state of Texas, and there was no record of this girl as to who she was," said Trupe.

But no one come forward. So Modeina Holmes had an idea. She asked a forensic artist to doctor up Amarillo Jane Doe's autopsy photo. The photo was sent to every sheriff's agency across the country to cross-check with their missing-person files.

"We included in that her fingerprints, her dental information and her contact prescription, because she had blue-tinted contacts in her eyes," said Holmes.

After weeks with no leads, police have no choice but to bury their Jane Doe. But this would be no pauper's service. The girl with no name and no family was adopted by the people of Amarillo.

As fate would have it, thousands of miles away in California, the story of the unknown girl's final farewell captivates Teresa Sprague. Sprague is an Internet sleuth who volunteers her time to help complete strangers find their missing loved ones.

"I just get nosy on the Internet is what I do, and I research the heck out of stuff and see if I can find clues to when they were last seen, and seeing if there's any valuable information anywhere," said Sprague.

"I thought, Wow, you know, this is such a young girl, and I started reading the circumstances of her disappearance and her characteristics and I knew something clicked right away," said Sprague.

Teresa Sprague is staring at the face of a dead girl in Texas and the picture of a missing teen from Iowa, wondering if she's finally solved the mystery of the identity of Amarillo Jane Doe.

"They were the same height, weight, the contacts, the hair color, there was a ring that was similar," said Sprague.

Sprague has been connecting desperate families with their missing loved ones for years. She knew instantly the likeness between the murdered girl and a beauty named Bambi Lynn Dick were more than eerily similar. But the real clincher:

Paul Dick and his wife Lorie spent more than two and a half decades searching for his baby sister, Bambi Lynn.

"My wife, mom and dad always figured that she would show up at the house one day, knock on the door, 'I'm here, sorry I left. Here's my two kids, I have a husband, white picket fence, a home and doing fine,'" said Paul Dick. "That just never happened."

The 17-year-old beauty left home one evening with a girlfriend. They were going to a heavy metal concert at a nearby coliseum in Davenport, Iowa.

Bambi's mom waited up that night, listening for the familiar metal clink of the front gate to let her know Bambi was home safe. Bambi never made it home. Bambi's girlfriend says she dropped her off that night. So what happened to her?

Davenport Police find no evidence of foul play. They wonder if Bambi simply ran away.

"She would never, ever stay away that long without trying to even contact me, because I was her big brother," said Paul.

After 26 excruciating years of waiting and wondering, an incredible chain of events is about to play out that could possibly give the family and the town of Amarillo some answers.

Paul stumbles across the missing persons website The Doe Network.

"He said 'I'm gonna try to do this," said Lorie Dick. "He said we had her picture, her graduation picture."

"I put Bambi's picture on, I said she had that nipple, starting a third breast, and I wrote that all down, sent that all in," said Paul. "I wasn't thinking anything was ever gonna happen."

But less than 24 hours later, Teresa Sprague just happened to be on the very same website and spots Bambi. She can't help but notice the resemblance to that murdered Amarillo Jane Doe.

"I called the sheriff's department that was listed for Amarillo's Jane Doe," said Sprague. "I called them and I said I think I have a match."

It was a call Modeina Holmes had waited almost half her life to hear. Before she hung up her gun and badge, Holmes sent out thousands of flyers with a doctored autopsy photo to every sheriff's department across the country, hoping to get a match.

"Over the years I think that we eliminated over 6,000 missing girls," said Holmes.

The call from Teresa Sprague that brought her back out of retirement.

"She told us that we really needed to contact the family," said Holmes. "She knew before we did that this was going to be our Jane Doe."

"I got an email. It was from Sgt. Holmes that she was going to send the morgue picture to me, and the minute it popped up on the screen I knew it was Bambi," said Lorie Dick, Paul's wife. "Paul kept saying that she really does look like Bambi."

"He sent us some photographs of her smiling so that we could see her teeth, and information about a third nipple under her right breast," said Holmes. "And when I saw the picture of Bambi Dick, and knowing what I did about Jane Doe, at that moment she was Bambi Dick."

Within days DNA confirmed what they all suspected: They finally had a match. Amarillo Jane Doe was indeed Bambi Dick.

"This was Bambi, and at least mom and dad would finally have some closure with that and know where their baby was resting," said Lorie.

"I was so excited but I was also very sad because I knew that it was not the answers they were looking," said Teresa Sprague.

"Without Teresa none of this would've ever happened," said Paul Dick. "And it's given us some closure, but the real closure is if we can find the culprit that did this, or culprits, and bring them to justice."

How could authorities in Iowa have missed all the flyers of Amarillo Jane Doe? A police report shows just days after Bambi would have turned 18 years old, police removed her from their missing-person list.

"They never thought you were missing at 17," said Paul. "They just figured you were a runaway and you would show back up again, you know. But that's not what it was."

Now that the mystery of Amarillo Jane Doe's identity has been solved, the hunt for Bambi's killer has begun. Police are hoping someone out there knows how the beautiful young teen got from Davenport, Iowa to Amarillo, Texas, and how she ended up dead.

"Somebody out there killed Bambi Dick and threw her away in a bar ditch 17 miles north of Amarillo, and someday somebody is going to tell on him or her, but then there's the ultimate judge if we never clear it," said Modeina Holmes.

For more than a quarter of a century Bambi Lynn Dick had been resting in peace in Amarillo, and now her family in Iowa can finally rest too.

"When I was talking to my mother I said she's been there for 26 years and they've taken care of her like she was one of theirs anyway, so I said leave her in Amarillo, she's a Texan throughout," said Paul Dick.

If you know anything about Bambi Dick's disappearance that night from the concert, and who she was seen leaving with, contact the Potter County Sheriff's Department, or submit a tip to Crime Watch Daily.