Jesse Barnes has been fighting to clear his name for nearly four decades after being convicted of the murder of his girlfriend.

It's a fate almost worse than death: A teenager trapped behind bars for a cold-blooded crime he says he didn't commit.

Jesse Barnes lived that nightmare for more than 40 years, accused of murdering his 15-year-old girlfriend Cynthia Vaughn in 1971.

And once she was found on that very dark night in the Cherry Hill section of Baltimore, Maryland, police had tough questions for Jesse.

He was asked whether he killed Cynthia Vaughn again and again, and even though Jesse pleaded not guilty to first-degree murder, he did confess, plunging him into a murky and never-ending legal mess.

"There was nothing ever corroborating any aspect of the confession that Jesse signed, which is a huge red flag," said Michael Imbroscio.

Jesse says he was actually at a party, and several friends could have vouched for him.

"I had the alibis, but they were never called," said Jesse Barnes.

And no witnesses saw Jesse with Cynthia that night.

Even more stunning, Jesse's confession says he killed her in an area away from where the murder actually took place.

"I was taken down to the pool where the police had directed me where the body was found," said Jesse. "They asked me to point. I point at one place and the police said 'No, that's not the spot. The spot is over here.'"

Even though Jesse confessed to killing Cynthia by the pool, the evidence showed she was killed 400 yards away, by a riverbed.

In the confession, Jesse said that there was a struggle and rape near the pool.

"That was just a fabricated statement," said Jesse.

Why would you lie about that?

"Because I was trying to give the police any kind of statement to keep them off me," said Jesse.

Jesse's attorneys told Crime Watch Daily that when investigators came out here to the pool they found no signs of a physical struggle, no DNA, not even a drop of blood.

"He couldn't lead police to new or missing evidence, the existing evidence didn't corroborate his confession statement. In fact it contradicted it," said Dr. Richard Leo, a criminologist at University of San Francisco.

But if Jesse was innocent, why would he confess to the murder?

"I had no choice," said Jesse.

"Individuals falsely confess when they feel hopeless, that there's no way out, when their spirit is broken and they feel like only way to escape the situation is by confessing," said Dr. Leo.

By all accounts Jesse endured a grueling, almost 32-hour interrogation, saying police threatened him with bodily injury, manhandling him near a third-floor window.

His friends were also brought in for questioning.

"We heard, someone says 'If you don't confess, we're going to throw you out this window.' As they brought Jesse out, Jesse was crying, he was handcuffed," said William Lann, a friend of Jesse's.

Jesse may have been the perfect target, with an IQ far below average.

"He had a borderline IQ, meaning he had an IQ in the 60-to-70 range, puts him at greater risk for making or agreeing to a false confession," said Leo.

"I was already crying because they told me that she had been murdered," said Jesse. "I don't understand why somebody would do such a thing to her."

After hours and hours of aggressive questioning, Jesse said he wasn't thinking. But he was talking.

"I was hysterical when they started showing different pictures of her," said Jesse.

"They kept pressuring Jesse to come up with a story to try to explain what happened. Jesse wanted to get out of there. They said 'Jesse, just tell us what happened and you can go home,'" said Michael Imbroscio.

"All they wanted to do was get me because I was her boyfriend," said Jesse. "I said, 'I held the legs and we dragged her down to the swimming pool.'"

Jesse was charged with murder. His friends, and even Cynthia's mother, were stunned.

"She did not believe Jesse killed her daughter," said Jesse's friend Deborah Jones.

Cynthia's brother couldn't imagine he was even capable of killing.

"My mother, my grandmother, said 'No way, Jesse couldn't have did it,' it's just, it's not his mentality, he was too kind-hearted, too giving, too caring," said Keith Monroe, Cynthia Vaughn's brother.

Cynthia Vaughn's family was so convinced Jesse was innocent they hired an attorney to represent him.

"It doesn't add up. Jesse shouldn't have been locked up in the first place for this," said Keith.

Jesse got a speedy trial.

"The entire trial was basically a day and a half," said Imbroscio.

But defense experts say, not necessarily a thorough one.

"His attorney unfortunately didn't do a proper investigation, had a lot of evidence at his disposal to show that Jesse didn't do this," said post-conviction attorney Peter Swanson. "His lawyer barely even put on a defense at all."

William Lann says he was never notified to go to court, even though he was Jesse's alibi.

Jesse was with you that night?

And yet Jesse was pronounced guilty. He was just 17 years old.

"It broke my heart, because when the judge gave me a life sentence, and I told the judge, I said 'Your honor,' I said, 'I cannot do a life sentence,'" said Jesse. "He told me 'a day for a day.'"

Jesse ended up serving more than 14,000 days -- almost 40 long years in prison, all while proclaiming his innocence and filing appeals.

"I wrote to judges and different public defenders. I ain't got nothing. They kept denying me and denying me," said Jesse.

But he never lost hope, and some of it came in the form of a woman named Mabel, who stood by him as days turned into decades.

"The system let me down deeply, put me through all that," said Jesse.

"I wish I could take back time and change things, just told them 'I wasn't nowhere around, y'all got the wrong man,'" said Jesse.

"This is a perfect storm of every bad thing that could happen, and it happened to Jesse," said Michael Imbroscio.

And soon, bad turned to worse. For Jesse, being in prison was like living in hell.

"I seen guys get stabbed from a balcony and the bodies land on the floor," said Jesse. "And when the lights come on you always find a body laying there with a dagger sticking out of it.

"I started watching my back 24/7, every day, every night, I kept one eye open," said Jesse.

And through it all his childhood friend Mabel kept him going.

"She was writing me constantly, bless her heart," said Jesse.

Mabel remembers watching Jesse and Cynthia playing when they were kids.

"He started hanging out at our house," said Mabel. "My family loved him, and still do."

Mabel says another man got her pregnant when she was just 14 years old.

"I told Jesse about it and he knew it wasn't his, and he took care of my child all these years, from behind bars," said Mabel. "After a while Jesse told me to go on with my life."

Did you go on with your life?

It seemed the connection was all Jesse had. And then came a glimmer of hope. A friend told him about the Innocence Project, and he asked Mabel to send them his court papers.

What did she think when she found out Maryland's Innocence Project was going to take on Jesse Barnes's case?

"Elated," said Mabel. "I could have jumped for joy. He was so worthy."

"My sister probably would be glad for him too as well," said Keith.

For two years, attorneys investigated and presented the court with overwhelming evidence, but a judge never ruled in Jesse's case.

"He was getting older in the Maryland prison system and we needed to do something," said Imbroscio.

So his lawyers made a deal.

Soon simple hope turned to justice for Jesse, and he was finally released from prison.

But Jesse's freedom came at a high price. He was released based only on a sentencing error.

"He still has the guilty conviction on his record, but the sentence was reduced down to time served," said Peter.

Even Cynthia's own brother agrees.

"I don't think it's fair. I think he should be vindicated from it," said Keith.

So who killed Cynthia Vaughn? Police have never solved her murder but Jesse's friends say they have a pretty good idea.

Who do you think killed Cynthia?

According to her confidants, Cynthia's stepfather had been abusing her.

"She told me that her stepfather was fooling with her, and I told her 'Well why don't you tell your mother?' And she told me she did tell her mother," said Jesse's friend Deborah Jones

Cynthia told Jesse about the abuse too.

"She told me that her stepfather kept coming in her bedroom and molesting her," said Jesse. "I wanted to call the police but Cynthia told me not to."

Jesse's new attorneys say their own investigation also led them to her stepfather.

"I don't think there's any doubt that Cornelius Monroe killed his stepdaughter," said Imbroscio. "Because he was mad that she had ran out that night and that he had a long history of abusing her."

"The night when she was killed, she had snuck out of her house and Cornelius was out by himself looking for Cynthia," said Peter Swanson. "He is really the only person in the neighborhood that didn't have an alibi."

Jesse's attorneys tried to track Monroe down, but he died while Jesse was still in prison, making it nearly impossible to determine who killed Cynthia that night.

Despite that, and everything that's happened to him, Jesse still feels blessed.

And now he's making up for lost time.

"That was the best day of my life," said Mabel.

Mabel and Jesse got married seven months after Jesse was freed.

"Your mom, a week before she passed away, she called me around to your house, and she asked me not to leave you, she made me promise never to leave you, and I am a woman of my word," said Mabel. "And that's another reason why I stuck to you."

"Yeah, you stuck by that too," said Jesse.

Even though Jesse has now finally found a new life, he's still lost a lot more than 40 years.

"I lost my mom, I lost my two sisters. I lost my mom, lost my dad, might even say I lost my whole family. Ain't nobody left but me and my two brothers," said Jesse. "It hurts. That's why I wanted to get out. Finally, let people know what I been through."

For Jesse, freedom is sweet. But the taste has left him wanting more to completely clear his name from Cynthia Vaughn's horrible murder.

And for the man who has already received one miracle, anything is possible.

"The governor, he could help me. If he could get me an acquittal," said Jesse. "I'm an innocent man and I want to get this sentence off my records."

Change.org petition: Pardon and compensate an innocent man who served 40 years for a crime he did not commit 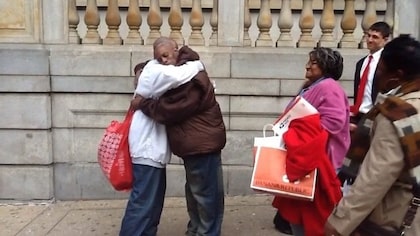