Video vigilante Zach Sweers has become a Youtube star by shooting his own undercover sting operations on alleged child predators.

Busting accused child sex predators is usually the job of law enforcement. But the man behind this camera is no cop -- Zach Sweers, 23, is a self-styled vigilante.

Web designer by day, predator poacher by night, Zach casts his net by putting ads on Craigslist, posing as a 15-year-old girl, then posts the citizen sex stings on his website, AnxietyWar.com.

Zach chats with the slimeballs, lures them in and arranges a rendezvous.

Here he is reading from a chat where he says he pretended to be a 15-year-old girl flirting with Zachary Snoeyink:

"The girl has said 'Hey, I've never tried vaginal sex,' and he says, 'You know you are not legal age right? I don't have an issue with it. I'm just letting you know. Maybe I could get a room for an hour or two.'"

A meeting is set. Snoeyink waits for the teen in a fast-food-chain parking lot. He doesn't know it, but the hunter is about to become the prey.

"I know your name. I know where you live. I know everything about you," Zach says to Snoeyink in the parking lot. "I know you have a gun. Don't do anything stupid. I'm armed too. OK? What are you doing?"

"To be honest with you, I was going to talk her out of it," Snoeyink says.

"Oh yeah? Really? Do you think the chat log says that?" says Zach.

"I would never in a hundred million years do something like that," Snoeyink says.

The 29-year-old Snoeyink insists he's innocent and says all he wanted do was counsel the inexperienced teenage girl about sex.

After getting caught, Snoeyink drives off. But he can't slink away for long. Zach brings police the exchange he captured with special glasses embedded with a camera.

Snoeyink is just one of seven accused sex predators charged with a felony of accosting a child for immoral purposes.

"Some people think that I'm insane, that I'm mentally off. That's not the case," Zach said.

Zach started doing undercover work because he was curious about how many alleged sex predators lived in the area.

Men like 68-year-old Dan Barnes, who Crime Watch Daily affiliate WXMI reports that according to court records lives close to an elementary school.

"He wanted to pay the girl for sex. He was looking for a 'sugar baby,'" said Zach.

Gramps thinks he's about to meet a real-life "Lolita" while waiting in that same parking lot.

"You wanted to have sex with this girl, underage girl," says Zach.

"So why did you do it? This was premeditated," Zach says.

For Zach, confrontations like this now make him suspicious of everyone.

"These people are the same people you would see being a preacher at a church, being a school teacher, anything," said Zach. "Everybody that you see could have something under their skin that they know is wrong, no one has found out, and that scares the crap out of me. Don't trust anyone."

And there are plenty to mistrust, people like former football coach Jered Andrus. Zach says the 37-year-old thinks he's going to get some action from a young girl in his truck. But this story has no happy ending.

When confronted, the creep flips his story, giving what appears to be the "standard saintly alibi," saying all he wanted to do was protect the young girl.

In another sting, Zach is shaving, doing his best to morph into a seventh-grader. He's about to bust a burly 24-year-old.

"I've been talking to this guy who thinks he is going to meet a 13-year-old boy for sex. And that kid is actually me," says Zach. "I use an old photo of myself from 2005.

"And when I asked him 'Where are you going to take me?' He said 'Maybe back to my house or something like that.'"

The guy waits in a park. Zach plays his part to a tee, even affecting a high-pitched voice.

"I don't know. We can walk in the woods or something," the man says.

After trudging into the woods, Zach finally reveals his identity, his voice now back to normal.

"I'm only here to offer advice if you need it," the man says.

"Advice? You said you'd be willing to have oral sex here," says Zach.

Thanks to Zach's footage the alleged online sex predator is arrested.

And now 19-year-old Aaron Russell, the youngest of the seven people prosecuted in the citizen sting, is facing a judge, pleading guilty to attempted accosting of a minor for immoral purposes.

With thousands of followers, many are calling Zach a hero. But the 23-year-old says he's not in it for the attention. He's running his undercover operation to empower kids to speak up and to keep predators from carrying out their sick fantasies.

The work he is doing is not without controversy.

"We cannot and we don't encourage this type of activity," said Sgt. Dixon.

Some cops don't support his efforts.

"This is a very dangerous practice and we don't condone it," said Dixon.

But Zach has no intention of stopping his citizen busts, even if running his undercover operation is draining. He says there's relief when the bad guys are caught.

"This is deep stuff, guys," says Zach. "I don't enjoy doing this. I enjoy catching the predators, but catching them is just so minute compared to talking. I talk to them for weeks, months sometimes, and so when I finally get to catch them, it's like finally it's going to be over with."

If convicted, Zach's targets could face up to four years in prison. 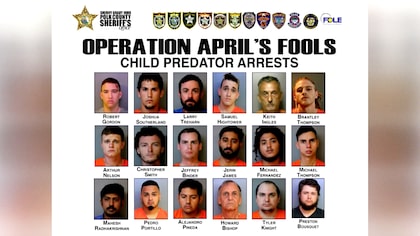