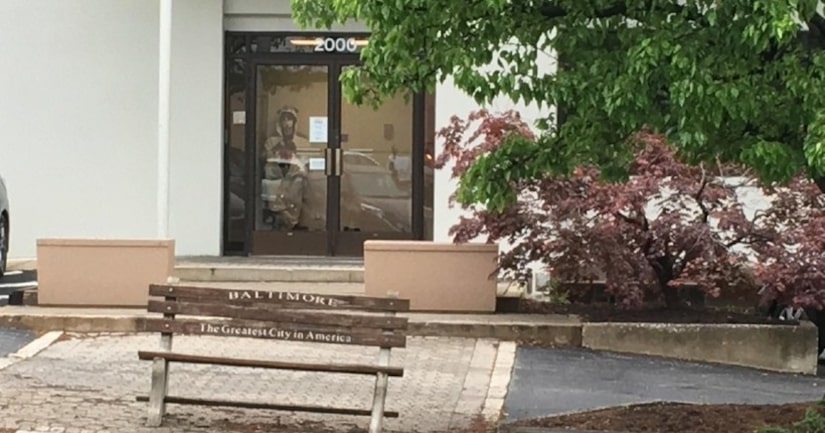 BALTIMORE -- (WBFF) -- A man wearing some sort of animal "onesie" threatening to "blow-up" WBFF-TV in Baltimore was shot by police Thursday outside of the station.

FOX45's Kai Jackson posted a live stream via Periscope from the scene.

Three loud "shots" were heard and the man was seen lying in the street.

Baltimore Police spokesman T.J. Smith said the suspect -- only described as a white man in his 20s -- walked toward officers refusing to follow their orders.

Smith said the man refused to take his hands out of his pockets when a counter sniper shot the suspect.

Police used a robot to get closer and communicate with the suspect who continued to ignore police commands. Eventually, the suspect was taken into custody by SWAT officers and separated from his device. Just after 4:30 p.m. the man was taken away by ambulance.

The man broke into the Sinclair-owned Fox affiliate at about 1:20 p.m. demanding the news station cover a story about some sort of government conspiracy. The man was wearing a surgical mask, sunglasses and a bizarre outfit described as an animal "onesie." The building was evacuated and security measures taken. Outside, a dark colored sedan was burning from its gas tank. The car belonged to the suspect who is also believed to have started the fire before walking into the lobby.

According to the station's security guard the unidentified suspect threatened to "blow up" the building. The suspect walked into the station's vestibule area and demanded to be let inside. The two conversed for about 45 minutes.

Evacuating staff spotted a man standing in the vestibule attached to the station lobby. He appeared to be wearing a bulky suit of some kind.

Police are on scene investigating. The stretch of W 41st Street in front of the building is closed.

"Someone came into the front of the building and they apparently said that they had some information they wanted to get on the air," FOX45 News Director Mike Tomko told reporters. "I came down at one point not knowing the person was in the lobby, near the vestibule area. He talked to me and was wearing what appears to be a full body white panda suit, surgical mask and sunglasses. He had a flash drive, said he had information he wanted to get on the air. He compared it to the information found in the Panama Papers. I told him, 'I can't let you in, you're going to have to leave the flash drive here and slide it through the opening.' He wouldn't do that. Apparently he had made some threats before."

According to Tomko, another threat was made earlier in the day to another employee, though specifics of that threat are unknown at this time.

All staff are out of the building. FOX45 plans to run a newscast this evening, Tomko said.

The suspect was believed to have survived the encounter with police, according to the stations' chief meteorologist Vytas Reid.

A bomb squad was dispatched to the news station in North Baltimore just before 3 p.m. Investigators continued to search the area after the suspect was to the hospital.

The suspect was separated from his device just after 4 p.m. Video and photos posted online showed officers stripping away the man's outfit and loading him into a police van.